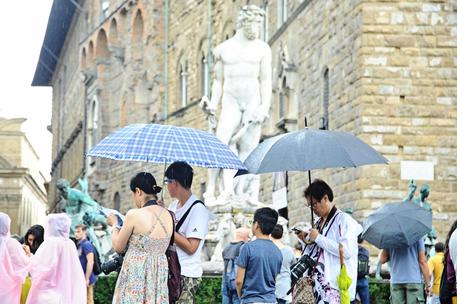 (ANSA) - Brussels, September 25 - Italy was the top European destination for non-European tourists in 2014, Eurostat said said Friday.
Non-continental visitors stayed a total of 57.36 billion nights last year - equal to 17.5% of the EU-28 tally of 327.22 billion nights for the EU-28.
Britain followed with 45.6 billion nights or 13.9% of the EU-28 total. Spain was close behind, while France brought up in fourth at 40.0 billion. Non-EU visitors represent a minority of travellers, however, and only accounted for 12.3% of total overnight visits in the EU-28. The top countries of origin for non-EU tourists were the United States and Russia, at 17.8% and 14.9%, respectively.
China was at 5.0%.
For Italy, however, the largest segment of non-European visitors comes from Brazil, at 23.2% of the total, followed by tourists from Japan and China. Eurostat issued the figures in honor of World Tourism Day on Sunday.