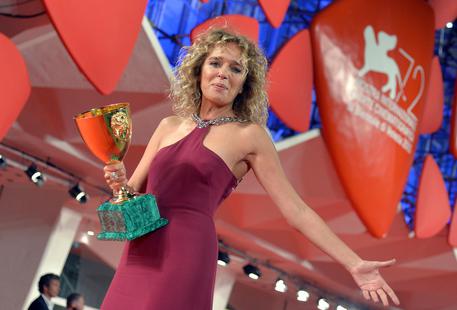 (ANSA) - Venice, September 14 - Italy's Valeria Golino won the Coppa Volpi best actress prize at the Venice Film Festival at the weekend for her powerful portrayal of the wife of a Neapolitan mobster in Per Amor Vostro (For Your Love).
It was the second time that the 49-year-old took the prize after she prevailed in 1986 for her performance in A Tale of Love. She said she was just as happy as when she won it the first time.
"I didn't expect to win," Golino, best-known internationally for playing the girlfriend of Tom Cruise's character in Rain Man, told ANSA.
"I knew that the film was good and I hoped it would be well received, although usually I don't believe that too much so I don't get upset afterwards.
"But it was a success and I love the affection I feel around me. Above all, I'm happy for me. I deserve it". The Golden Lion best film prize went to Venezuela's Lorenzo Vigas for his debut feature film From Afar, the story of a middled-aged man's gay love affair with a young hustler. France's Fabrice Luchini won the best actor prize for his performance as a judge in L'Hermine (Courted).