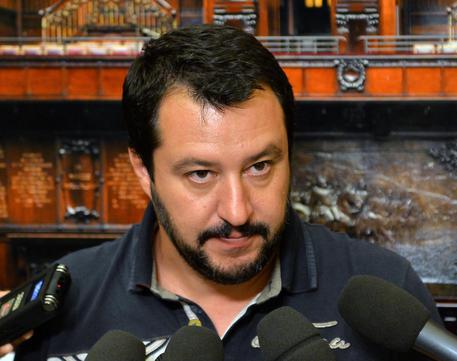 (ANSA) - Mineo, September 4 - Matteo Salvini, leader of anti-immigrant, anti-euro Northern League party, visited the Cara refugee reception centre at Mineo near Catania on Friday and called for its closure.
The centre has been in the spotlight in recent days after one of its residents was arrested at the weekend in connection with the killing of a couple in their home in Palagonia, and the suspected rape of one of the victims.
"Even the bishops' newspaper, the 5-Star Movement and Forza Italia are calling for the closure of the Cara (centre)," Salvini said. "All that's left are the baby Jesus and martians to call for closing this out-in-the-open shame, whose management has involved even the cooperatives of Rome's Mafia Capitale".
Salvini said the centre was inaugurated by his party colleague Roberto Maroni as a temporary measure during the war in Libya, and questioned whether all of its residents were actual political refugees requesting asylum.
"This is the fourth time I've come here. I don't know how many other investigations, how many other interventions and murders and disasters still have to happen to close the Cara di Mineo. Here hundreds of millions of euros have been thrown away," he said.
"Today I'm going to ask the nationality of the residents and we'll see how many of the resident immigrants are truly fleeing from war," Salvini said.
Salvini said the migrant crisis could be resolved by "speeding up procedures to identify true refugees and deporting all of those who aren't actual asylum seekers".
"But landings in Sicily and Calabria also have to be blocked, and there needs to be action taken in Africa," Salvini said.
He said he'll be going to Nigeria in the coming weeks "to understand what needs to be done so that Nigerians stay in their country".
Prior to his arrival at the Mineo center, Salvini tweeted his disapproval of European leaders' handling of the immigrant crisis.
"Europe will punish member states that don't welcome immigrants enough? Clowns. The umpteenth proof that this Europe is a dangerous cage," he tweeted.
"The PD secretary and Alfano are two incompetents glued to their chairs. Where are they? I don't see Renzi and Alfano, I didn't see them in Palagonia: if I were them I'd be ashamed," Salvini said prior to his visit, referring to Italy's prime minister and interior minister, respectively.
Then, in direct response to a comment made by Alfano on Thursday that Salvini is a "jackal," Salvini said, "the real jackals are those who cry over deaths that could have been avoided".
"The EU and Italy have an embargo against the Syrian government and are accomplices to the ISIS massacres. Those images should wake up the consciences of those who pretend to be good but are actually true assassins," Salvini said.
The images he referred to were photos distributed on social media in recent days of a three-year-old Syrian boy who washed up on a Turkish beach after drowning in an attempt to flee Syria with his family.
Salvini also called European leaders "ridiculous" and said German Chancellor Angela Merkel's "best effort is to say 'I'll take the Syrians', the only people who are fleeing war, as if to say, 'I choose who I want and you can keep the rest," he said. Upon leaving the centre, Salvini came out strongly against the idea of opening humanitarian corridors in Syria to allow for safe passage of refugees.
"Yes, there's a war there, there 40% of the territory is occupied by the Islamic caliphate, so there, truly, you'd need to intervene with bombs to exterminate those beasts," he said.