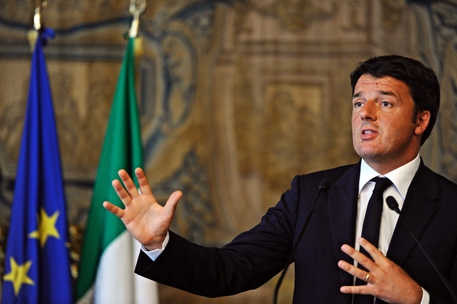 (ANSA) - Florence, September 3 - Italian Premier Matteo Renzi on Thursday urged Europe to come up with a united response to the immigration crisis based on asylum rights, and warned that the emergency situation was set to continue for a long time.
Europe is facing unprecedented arrivals of migrants fleeing conflict in countries such as Syria, with more than 350,000 people reaching the continent so far this year, according to figures from the International Organization for Migration.
The route from Libya to Italy is one of the most commonly taken by those trying to enter Europe.
"It is Europe's duty to give a united response," Renzi said during a joint press conference with Maltese Premier Joseph Muscat in Florence.
"One that starts with European asylum rights, with EU initiatives on reception and management of the (migrant) emergency, with EU repatriation, but also with a global strategy that holds together fundamental intervention to be made in countries of origin," he said.
He added that the migrant influx was not just a temporary emergency but one that was set to continue for a long time.
"Weeks and months will be needed," he said.
He warned that Europe "could not lose face" when dealing with the crisis, pointing to the photo of a 2-year-old Syrian boy dead on a Turkish beach which he said "grips the heart and assails the soul".
He said that he was in agreement with Malta's Muscat that the focus should be squarely on saving human lives.
Muscat said Europe urgently needed a credible authority in Libya that it could collaborate with to help manage the situation.
"The only way I see we can have a solution in the medium-term is to have a credible partner in Libya, otherwise it will only get worse," Muscat said.