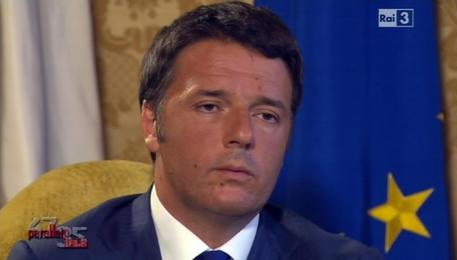 (ANSA) - Rome, September 2 - Italian Premier Matteo Renzi on Wednesday made it clear that it will be Rome and not Brussels who will decide the government's tax-cutting moves.
Speaking a day after Brussels appeared to dictate limits to the dynamic premier, Renzi rebuffed EU criticism of his pledge to abolish the IMU and TASI taxes, saying that he hoped it was just hot summer weather that affected judgements in European offices.
On Tuesday EU sources said Renzi's plan to cut property taxes was against EU recommendations, which were more in favopur of cutting labour taxes. "We have read the recent announcement on taxes in Italy but we can't comment since we don't have the details of the plans...but it is well-known that the Council has recommended that Italy move to property and consumption the tax burden weighing labour and capital," they said.
The sources also said Italy had already been granted budget flexibility, a cut from 0.5% to 0.1% in the Maastricht-dictated fiscal adjustment, in exchange for reforms last spring. Italy has "made progress" on reforms but "it is essential that impetus is not lost" in enacting them, they said.
This is the "key factor for exploiting Italy's growth potential". Renzi has been seeking more wiggle room for more growth-stoking moves.
Renzi replied to the strictures on taxes Wednesday by saying: "The European Union, which turns its back on migrants, thinks to come to us and explain taxes".
"Somebody in Brussels is thinking of draw up the list of taxes to cut".
"I hope this was because of the heat, it is up to us to decide which taxes to cut, not Brussels".
Italians will pay "on December 16 their second tranche of TASI, which will mark the funeral of taxes on homes," Renzi said.
The European Commission said later Wednesday that it would assess next years budget, presumably containing the planned tax cuts, in mid-October.
"Its analysis would be based on "the facts," it stressed.
Renzi is putting together the package with Economy Minister Pier Carlo Padoan, who recently said the EU now "trusts" Italy on economic issues thanks to the raft of structural reforms it has enacted over the past year and a half.
Because of this, he contended, Italy will be able to enjoy the potential for pump-priming moves allowed by the flexibility inherent in euro parameters.
Padoan added that the euro zone as a whole was "not growing much" but the recent growth figures for Italy - revised upwards to 0.3% in the second quarter - "confirm the picture of the DEF," the government's economic planning blueprint.
The government's fiscal priorities over the next three years include helping families with their house taxes, "then we want to go back to helping businesses and the lowest earners," Padoan said.
Renzi has said that the municipal service tax TASI and the IMU property tax will be abolished next year, followed by cuts to the IRES business tax in 2017 and IRPEF personal income tax in 2018.
The government is also mulling tax breaks to help the struggling south of Italy, Padoan said.
In other remarks Wednesday, Renzi said GDP growth of 0.3% in the second quarter shows "small signs" that the Italian economy has restarted but now "we must run, run, run". Istat revised upwards its Q2 growth estimate from 0.2% Tuesday and said unemployment was down 0.5% to 12% in July. "We're not the government of the trade unions or the Confindustria business lobby, we're ordinary people," Renzi added.
Confindustria said Tuesday the apparent growth spurt was due to external factors while the big CGIL trade union accused both sides of indulging in "propaganda".
Also Wednesday, Renzi said that the number of local-government-controlled companies would be cut in the next budget. "Their main purpose is to give jobs to former politicians," he said. The number per province will be limited, he said. There has been a string of scandals linked to companies in which local governments around Italy have stakes.
Finally, Renzi chided Europe for failing to come up with an effective migrant policy.
The premier said it was time for Europe to "wake up" on the migrant crisis. "Its reputation is at stake," he said. Renzi called for a "joint policy" combining shelter for refugees with repatriation for economic migrants and "saving human lives".
Italy has been urging Europe to do more to help it cope with a massive influx of migrants and refugees across the Mediterranean.