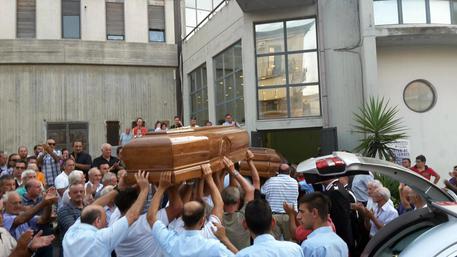 (ANSA)- Rome, September 2 - Mourners in Sicily continued Wednesday to pay their last respects to a married couple murdered during an attempted burglary of their home on August 30. An 18-year-old Ivorian immigrant and resident of a shelter for asylum seekers is under investigation for the double murder.
"Facing hardline issues of responsibility and seriousness, he who makes a mistake must pay fully, up to the last day," Italian Premier Matteo Renzi told the radio station RTL 102.5 on Wednesday, making reference to crimes implicating immigrants that recently have made headlines in Italy.
Renzi also warned that the threat of "terrorism should not be underestimated" regarding illegal immigrants flocking to Europe.
Investigators say Vincenzo Solano, 68, and Mercedes Ibanez, 70, were killed in their house in Palagonia, a town in southeastern Sicily, when an intruder attempted to rob them. The wake has been organised in the town hall and a prayer vigil held in the local parishes. The funeral will be held at 5:00pm and presided over by the bishop of the town of Caltagirone, Monsignor Calogero Peri.