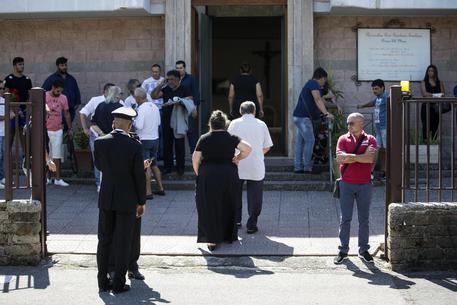 (ANSA) - Rome, August 26 - A suffrage mass was held in memory of Roman crime boss Vittorio Casamonica under extraordinarily tight security Wednesday just a week after the notorious mobster's grandiose funeral outraged Italians and the political establishment.
The mass was celebrated simply in the church of San Girolamo Emiliani at the suburb of Casal Moreno with a heavy presence of plainclothes police on hand.
Female mourners attending the mass covered their faces to avoid being filmed by television cameras.
Many friends of the boss attending wore black suits or tee-shirts or sported beards in sign of mourning.
Egidia Casamonica, a niece of the boss said "if there are journalists here they make us more important. We are famous, more important than VIPs." At the end of the mass there were moments of tension as relatives of Casamonica pushed reporters jostling to interview them.
"Don't provoke us, have some respect," relatives said before plainclothes cops intervened to restore order.
"This is not mafia," Egidia claimed, "We don't make war. We are pacifists. We throw flowers, not bombs like ISIS".
Rose petals were dropped from a helicopter onto Vittorio Casamonica's horse-drawn hearse last week as the strains of The Godfather theme were played.