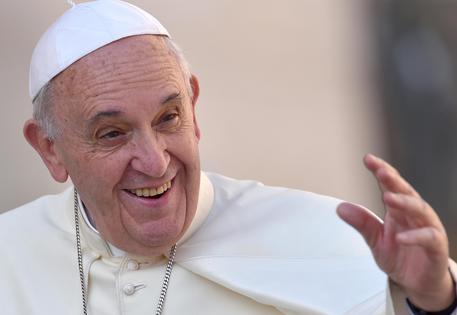 (ANSA) - Vatican City, August 26 -Pope Francis called for prayers Wednesday to overcome "the ecological crisis that humanity is living" and told thousands of pilgrims and tourists that mums and dads deserve the Nobel prize for finding time to run busy family lives.
Speaking to a crowd of 10,000 people in his weekly general audience, the 100th such audience he has held since his election, the Argentine pontiff urged the faithful to take part on Tuesday September 1 in the world Day of prayer for care of the created.
"In communion with our orthodox brothers and with all people of good will, we want to offer our contribution to overcoming the ecological crisis that humanity is living," the pope said.
"In the whole world the local churches have planned prayer initiatives and prayers of reflection, to make that Day a powerful moment in view also of adopting a compatible lifestyle," said Francis.
"With the bishops, priests, consecrated people and lay faithful of the Roman Curia, we will meet at the Basilica of St peter's at 1700 hours for the Liturgy of the Word, to which all Romans are invited to attend, and all pilgrims and anyone wishing".
Francis also mulled the problems of managing family time, saying "family time, we know well, is complicated time, crowded, busy, anxious - it is never enough, there are always so many things to do." "Those with a family learn to resolve an equation that not even great mathematicians know how to solve - how to make 24 hours become double".
"There are mums and dads who could win the Nobel prize," Francis quipped.
"I don't know how they do it, but they get on with it and they do. There is so much work in a family".
Francis made a brief tour of the square in his topless popemobile jeep during the audience, greeting the crowd and blessing them to warm applause.
Theme of the audience was time for prayer. The pope noted that "there is something dear to my heart, and that I have seen in many cities - there are children who have not learned to make the sign of the cross".
"But you, mum and dad, teach your child to pray, to make the sign of the cross. This is a beautiful duty for mum and dad".
Francis also stressed the need to say grace at meals. " "The Gospel read in the family is like bread that nourishes the heart of everyone," he said.
"And the morning and the evening, when we sit down at the table, let's learn to say a prayer, with so much simplicity -- to Jesus who comes among us".
"The spirit of prayer reconsigns time to God, exits from the obsession of a life where there is never enough time, refinds the peace of necessary things, and discovers the joy of unexpected gifts," the Roman Catholic leader continued.
"Prayer emerges from listening to Jesus, reading the Gospel, confidence with the Word of God," Francis went on.
"Do we have this confidence in our family? Do we have the Gospel in our home? Do we open it from time to time? Do we meditate on it together with reciting the rosary?" "Christians' most common complaint regards their time," the pope said, "'I ought to pray more ... but often I have no time'. We here this continuously. The displeasure is sincere, certainly, because the human heart is always searching for prayer, and if it doesn't find it has no peace. For them to meet, one has to cultivate in the heart a warm 'love' for God, an affectionate love," the pope said. http://popefrancisnewsapp.com/