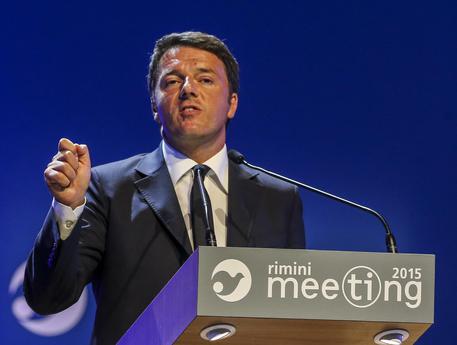 (ANSA) - Rimini, August 25 - Italy will keep on saving lives in the Mediterranean even if it costs the government in terms of electoral support, Premier Matteo Renzi vowed on his return to political action after the summer break Tuesday.
In a wide-ranging speech on his first visit to the annual gathering of the influential lay Catholic activist group Comunione e Liberazione (Communion and Liberation, CL), Renzi also promised to press on with a reform programme he said has been blocked by 20 years of rows pro and against former premier and media magnate Silvio Berlusconi. Alongside key reforms to make Italy easier to govern, Renzi also pledged to keep on cutting taxes over the next three years.
Commenting on the migrant emergency in the Mediterranean, where Italy is in the front line along with Greece, the premier said: "First we'll save human lives even at the cost of losing votes. "It's a question of civilisation." Renzi's Democratic Party (PD) has been falling in the polls after the government stepped up migrant-rescue efforts, while the anti-immigrant Northern League has been surging.
(In related news Tuesday, the EU said an initial total of 40,000 migrants to be relocated among member countries was far too small.) Promising to plough ahead with the ambitious reform programme he has staked his political legacy on, Renzi said: "It wont be simply with reforms that Italy will rediscover its identity but reforms are the premise" for that recovery. "The package of reforms we are trying to enact from the Jobs Act (labour reform) to institutional ones (scrapping the Senate), from the electoral law (giving a clear winner) to the reorganisation of the civil service, from school reform to the civil liability of magistrates...the attempt is to get Italy to make up for lost time," he said. "Italy can play a role in a changing Europe but provided it itself changes," he said.
Such reforms have been blocked for the last 20 years by the squabbling pro-Berlusconi and anti-Berlusconi blocs, Renzi argued.
Renzi said that the so-called Second Republic - ushered in by the political-establishment wipeout sparked by the Bribesville probes, followed by media magnate Berlusconi's first rise to power - had "over the last 20 years turned into a permanent ideological row which lost sight of the common good and while the world was racing ahead it remained stuck in sterile internal discussions".
In a dig at Salvini, who has vowed to bring Italy to a three-day standstill in an anti-migrant protest in November, Renzi said "there are those who want to block Italy...Italy needs to start moving again...it's been blocked for 20 years".
The same period of time, 20 years, have meanwhile been lost on EU strategy and the Mediterranean, Renzi said. "When we speak about strategy for the EU perhaps 20 years have been lost, when we speak about the Mediterranean we aren't talking about an EU frontier but the heart of the EU, but there hasn't been enough attention of politics in considering the Mediterranean the heart of EU debate, we took a cross-eyed view", he said. In other EU foreign-policy remarks, Renzi hailed the United States as the 'pole star' of the West but termed EU policy "against Russia" an "error".
The premier went on to unveil his tax-cutting plans on a visit to the Marche seaside town of Pesaro.
The municipal service tax TASI and the IMU property tax will be abolished next year, Renzi said. "It's not possible to keep on playing this game," he said.
Renzi, who has already slashed the regional tax on business IRAP, said his tax-cutting programme would continue in 2017 when the IRES business tax will be cut to 24%, "below Spain" in 2017. Then, in 2018, "we can intervene on IRPEF (personal income tax)," he said.
Renzi said that taxation in Italy was "over the top". He said taxes had to be cut to restore "social equity". The premier said this would take more than a year and it was not a question of "gaining consensus".
Eliminating IMU is a hobby-horse of Berlusconi and Salvini and the League leader reacted by tweeting: "He (Renzi) is copying the centre right. Ridiculous!" In other remarks to the CL meeting, Renzi reiterated his opposition to the direct election of Senators when the upper house is turned into a regional body according to a linchpin of his moves to reboot Italy's slow, costly political machinery.
A sizeable minority of the PD is opposed to abolishing the direct election of Senators and there are fears he might not have a majority to pass the reform.
"There are those who complain that the direct election (of Senators) is lacking but more voting doesn't (automatically) mean more democracy, that's the Telegatto (annual TV awards)," Renzi said.
"We need to create political decision makers, it isn't by multiplying posts that you multiply democracy. It's an incredible argument," he said. A Renzi visit to L'Aquila later, still recovering from an earthquake six years ago, was disrupted by demonstrators protesting an alleged lack of government action to get the city fully back on its feet.