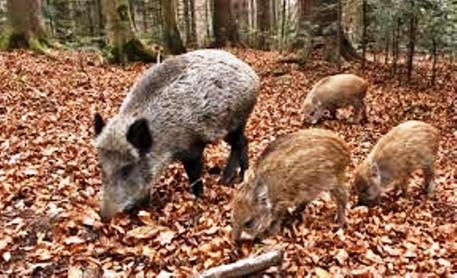 (ANSA) Rome, August 19 - An escalation in damage and fatal accidents caused by wild boars in Italy is due to "uncontrolled proliferation" of the animals believed to number more than 1 million on the peninsula, the Coldiretti farmers' trade union said Wednesday.
Accidents such as the death of a 39-year-old man who died when his Smart car slammed into a wild boar near L'Aquila are a consequence of the population of the free ranging animals doubling over the past 10 years, Coldiretti added.
"The security of rural areas and suburbs is in danger to the proliferation of wild animals like boars that invade cultivated land, inhabited areas and roads where they pose a grave danger to things and persons." Total damage by the pesky boars to crops, farm animals and road accidents costs almost 100 million euros a year, Coldiretti estimates, even before taking into consideration fatalities.
While evidently stopping short of asking for a cull specifically, Coldiretti has demanded changes in the law and has drawn up a lengthy paper on the matter on which it had a long discussion with the environmentalist Lega Ambiente pressure group, the union said.