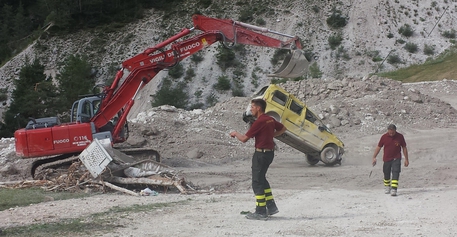 (ANSA) - Rome, August 6 - Environment Minister Luca Galletti said Thursday that the Italian government had allocated 1.3 billion euros for flood prevention and measures to fix so-called hydrogeological instability. This became a particularly hot issue this week after three people were killed in the Veneto region when intense rain caused landslides and flash flooding - the latest in a series of similar disasters. "There is funding of 1.303 billion euros (to combat floods and hydrogeological instability), of which 654 million has already been made available for projects in the major cities," Galletti said. Italy's particular geographic characteristics and widespread illegal construction that erodes the natural defences that help prevent floods had been blamed for contributing to the hydrogeological instability that makes the country especially vulnerable to disasters when extreme weather strikes.
Meanwhile, Veneto Governor Luca Zaia said that his government will declare a state of emergency in communities affected by the flooding and landslides. He said that will include not only the community of San Vito di Cadore, where the three deaths were recorded in this week's disaster, but nearby communities connected to that event.
Zaia said he was "satisfied" with Galletti's pledge of 1.3 billion euros, but added he expects the Veneto will be first to receive aid to try to prevent something similar in future.
"Nature always wins," said Zaia.
"We can only mitigate the effects with (public) works done well". Galletti said that approval for the initial 654.3 million euros will be given for projects that are identified by auditors "as priorities".
The remaining 648.7 million euros will be allocated to projects early next year, said the minister.
A protocol will be developed with unions to allow round-the-clock work on the most critical projects, added Galletti.
Too much time has been lost by governments that for years failed to tackle Italy's flooding and hydrogeological problems, he said.