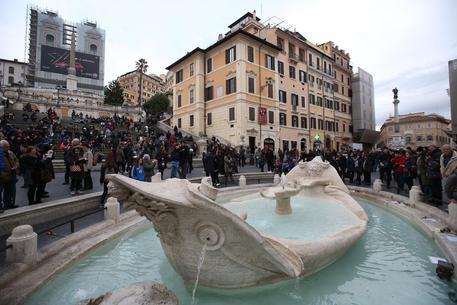 (ANSA) - Rome, August 4 - Rome's mayor Ignazio Marino on Tuesday launched an initiative to clean up 50 of the most prominent fountains in the Italian capital, including well-known monuments in front of the Spanish Steps and on the Janiculum hill.
The "Clean Fountains" operation will run until September 30 and is set to cost 50,000 euros.
"Rome has the luck of having dozens of historic fountains and we have decided to restore the top 50," Marino said.
"We want to make our city increasingly beautiful and the fountains play a role in decorum and in the welcoming of tourists," he said.
He also said he would propose increasing fines for people who dump rubbish or jump into historic fountains in the centre.
Earlier this year fans of Dutch soccer team Feyenoord wreaked havoc around the Spanish Steps and damaged the famed Barcaccia fountain, by Renaissance master Bernini.
Marino has been under fire recently for his city management skills following several international media reports about degradation, disorganisation and corruption in the Italian capital.