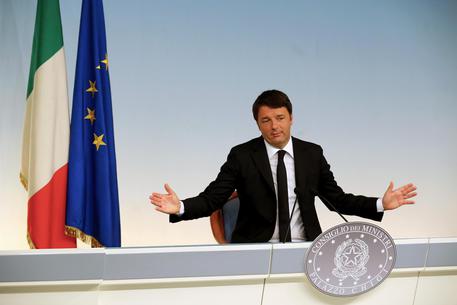 (ANSA) - Rome, July 31 - Premier Matteo Renzi said Friday parliament is not "a rubber stamp for Trani prosecutors". He spoke after the Senate - including MPs from his Democratic Party (PD) - on Wednesday nixed a motion to arrest Senator Antonio Azzollini on a warrant from Trani prosecutors for suspected fraud and racketeering. Azzollini is from the small New Center Right (NCD) party, a junior member of the ruling coalition.
He is under investigation for alleged involvement in the 500-million-euro crack-up of the Divine Providence nursing home chain, employing 1,600 people in the town of Bisceglie in Bari province.
"The PD caucus leader saw the prosecution papers," said Renzi. "He was convinced...there may be elements of persecution, and he gave the caucus freedom to vote their conscience".
"I don't know which way I would have voted, because I haven't read the papers," the premier went on.
"But I consider the vote a sign of maturity," he said.
"I believe in the good faith and the intelligence of the PD Senators".
The PD has come under fire after many of its members voted to save Azzollini from arrest in Wednesday's secret vote after the party left Senators free to vote their conscience.
Prosecutors wanted him arrested because of the "well-founded danger the Senator would reiterate crimes" listed as racketeering, inducement to corruption and fraudulent bankruptcy. A Bari court had upheld the pretrial arrest warrant based on significant evidence against Azzollini and another nine people being investigated in the crack-up.
"The PD (saved) Azzollini to save the majority coalition, thus establishing the principle that all are not equal before the law," Loredana De Petris from the small, leftwing opposition Left Ecology Freedom (SEL) party said after Wednesday's vote. "The PD is an accomplice of Azzollini...who as budget committee chair for many years must have done a lot of people a lot of favors," said Senator Mario Michele Giarrusso from the anti-establishment, anti-euro 5-Star Movement (M5S), an opposition party that is the second-largest in Italy after the ruling PD. "Renzi and the PD dropped their pants to save their seats," Matteo Salvini, chief of the opposition anti-immigrant, anti-euro Northern League party, wrote on Facebook.