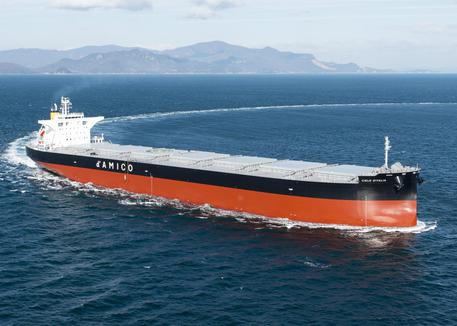 (ANSA) - Milan, July 30 - Italian tanker operator D'Amico International Shipping (DIS) on Thursday reported a surge in net profit in the second quarter of 2015 as it said strengthening demand in product tanker markets and low oil prices increased trading opportunities. DIS said net profit came in at $18.7 million in the second quarter, up from $1.4 million in the same period of 2014.
Time-charter equivalent earnings (TCE) stood at $81.2 million in the quarter, up from $48.6 million in the same quarter of the previous year. Earnings before interest, tax, depreciation and amortisation (EBITDA) rose to $23.4 million from $10.4 million.
"Our growth strategy both in terms of owned and time chartered-in vessels (we went from 39 average vessels in H1 2014 to 52 in H1 2015) has proven very successful so far," said Chief Executive Marco Fiori. "I believe 2015 is now set to be a very profitable year for our industry," he said. "We intend to consolidate DIS leading position in the product tanker industry and in that view, during the second quarter of the year we added 4 LR1 (Long Range - 75,000 dwt) newbuilding vessels to our current orderbook," he added. DIS is one of the world's leading maritime transport groups, managing and operating dry cargo vessels and tankers and providing international shipping services. Increased production in the Middle East and Asia, coupled with strong refining margins in the OECD, supported refined products tanker demand during the quarter, DIS said.
In the first six months of 2015, DIS recorded its best first-half result since 2008, swinging to a net profit of $30 million compared to a loss of $5.5 million in the same period of the previous year.
Time charter equivalent earnings (TCE) came in at $158.1 million in the first half of 2015 compared to $95.1 million in the same period of 2014.
EBITDA in the first half rose to $45 million from $14.2 million in the first half of the previous year.
Net debt also rose to $374 million from $280.6 million at the end of June 2014.