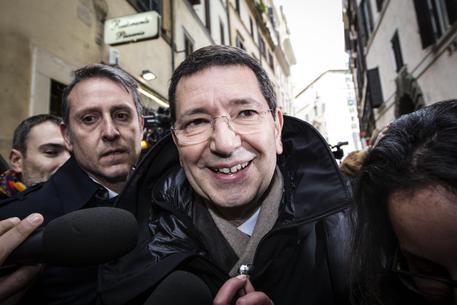 (ANSA) - Rome, July 30 - Embattled Rome Mayor Ignazio Marino on Thursday defended his performance since taking office over two years ago, saying he didn't expect to find opposition from his own Democratic Party (PD) or infiltration by criminals in city management.
"Two years I certainly didn't think I had arrived to govern Stockholm, but nor did I expect to find a rotten PD against me or criminal infiltration of top city management," Marino said in an interview with newspaper Corriere della Sera. "Renzi wasn't yet born in 1966, but he certainly knows that after the flooding in Florence the first step was to remove the mud, then to reorder the archives," Marino continued.
"Having removed the mud from Rome, I now want to be judged on how I put the archives in order," he said.
Marino described as "literature" the notion that Premier Matteo Renzi, secretary of the PD, might be hostile to him.
"In his coarse language, he merely stated the obvious," said the ex heart surgeon in reference to calls by the former mayor of Florence to Marino to either show he can govern, or go.
"I am not afraid of losing Rome, I am the first mayor that is free from political parties", which in the Eternal City were "electoral and business committees", Marino said. The mayor hailed the recent appointment of PD president Matteo Orfini as commissioner of the party's Rome branch amid the Mafia Capitale scandal involving alleged infiltration by a local crime syndicate into city contracts as a "breath of fresh air". "Before his arrival it was possible to talk only about posts and appointments with certain PD members," Marino said.
Also, he described recent reports in the New York Times and Le Monde of degradation in the capital as a "strategy" to damage Italy in its bid to host the 2024 summer Olympics. "Strangely enough, with competition coming from America and France," Marino said.