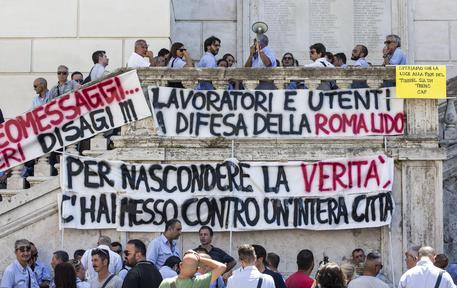 (ANSA) - Rome, July 29 - Drivers with Rome's public transport company ATAC on Wednesday staged a demonstration in front of City Hall to protest against a privatization plan.
Protesters whistled and chanted slogans against Rome Mayor Ignazio Marino, who has announced the city will be seeking private investors to buy a minority stake of the ailing company.
"We want the service to remain public," demonstrators said, urging the mayor to receive a delegation of ATAC employees.
Last week, Marino announced he and Lazio Governor Nicola Zingaretti's decision to seek a minority private partner for the chronically troubled public company.
The mayor said he has given ATAC a mandate to write up an industrial plan to attract investors, adding this will bring about "the end of in-house management beginning in 2019". The only other alternative was shutting ATAC down and declaring bankruptcy, Marino noted.
Meanwhile the city has reportedly decided to inject another 200 million euros into the company.