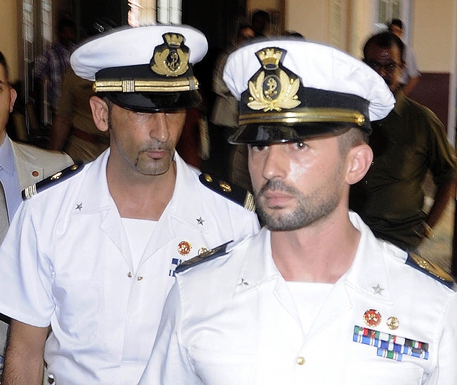 (ANSA) - Rome, July 27 - President Sergio Mattarella and Foreign Minister Paolo Gentiloni said Monday that Italy was ready to defend two Italian marines accused of killing two Indian fishermen during an anti-piracy mission in 2012 at international arbitration. The Indian government has said it will tell a hearing at the International Tribunal for the Law of the Sea (ITLOS) in Hamburg on August 10 that it is opposed to the case being decided at arbitration, arguing that it has jurisdiction.
"I confirm the government's commitment to defend the arguments of marines Massimiliano Latore and Salvatore Girone at the international bodies we have decided to turn to," Gentiloni told the XI conference of ambassadors in Rome. Mattarella vowed Monday that Italy will battle hard to defend the Italian marines. "Italy is a country that is ready to protect its citizens and it intends to keep battling with determination (for the two marines)," he said at the conference.
The case has caused a long diplomatic dispute between Rome and New Delhi.
Latorre and Girone are accused of killing fishermen Valentine (aka Gelastine) and Ajesh Binki after allegedly mistaking them for pirates and opening fire on their fishing trawler while guarding the privately owned Italian-flagged oil-tanker MT Enrica Lexie off the coast of Kerala on February 15, 2012.
India granted Latorre leave to return to Italy last year after he suffered a stroke.
Rome has protested the many delays in the case, part of the reason that prompted it to take the case to arbitration.
Formal charges have not yet been presented.
Italy successfully fought to ensure New Delhi took the death penalty off the table and dropped the application of a severe anti-terrorism, anti-piracy law, which it said would have equated Italy with a terrorist state.
Rome argues the case is not in India's jurisdiction as the incident took place outside the country's territorial waters.
It also says the marines should be exempt from prosecution in India, because they are servicemen who were working on an anti-piracy mission.
The EU has said the dispute risks endangering international anti-piracy efforts.
Mattarella also stressed that Italy was doing its utmost to free four Italians taken hostage in Libya this month as well as Father Paolo Dall'Oglio, an Italian Jesuit priest taken captive in Syria in 2013.
"The Italian commitment remains at the maximum level," Mattarella said. On Sunday, Pope Francis made an appeal for the release of peace activist Dall'Oglio during his Angelus service.
According to unconfirmed reports earlier this year, Dall'Oglio was in a prison run by militant Islamist group ISIS between Raqqa and Aleppo in the north of Syria. The four Italians captured in Libya last week, Gino Pollicardo, Fausto Piano, Filippo Calcagno and Salvatore Failla, are workers for oil construction firm Bonatti. Secret service undersecretary Marco Minniti told the intelligence oversight committee Copasir last week that the abductions were probably the work of a gang with no links to terror who are just out for ransom money.
Mattarella said that Italy was a leading force in the battle to stop ISIS. "Italy is at the side of the countries that, on the other side of the Mediterranean, are on the front line in the fight against the obscurantism and barbarity," he said. "Fundamentalist terrorism is a serious phenomenon that should be addressed in the right way, with firmness and determination, while rejecting Islamophobic impulses".