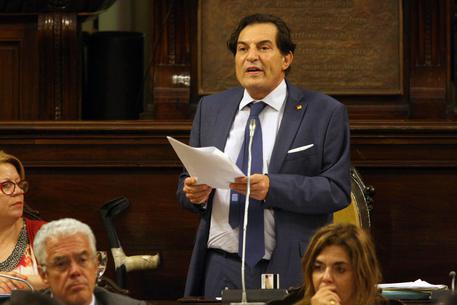 (ANSA) - Palermo, July 23 - Sicily Governor Rosario Crocetta told the Sicilian regional assembly (ARS) he would not quit over a controversial wiretap whose existence has been disputed. "I refuse to offer my flesh to hungry executioners...everyone knows that wiretap does not exist," he said. Crocetta suspended himself after a reputable news weekly published the tap in which he allegedly said nothing when his doctor Matteo Turino, probed in a hospital graft case, said Sicily health councillor Lucia Borsellino should meet the same fate as her Cosa-Nostra slain father, anti-Mafia prosecutor Paolo Borsellino. Crocetta said he was the victim of a smear campaign after prosecutor's offices said they had no such wiretap on their files.
However the magazine, L'Espresso, stood by its story, saying the tap had been classified. The governor, a member of Premier Matteo Renzi's Democratic Party (PD), is suing L'Espresso for 10 million euros. Renzi is meeting the PD's head in Sicily, Fausto Raciti, about the case on Thursday. Also on Thursday, Justice Minister Andrea Orlando said he had ordered "preliminary checks" into the wiretap. "I have launched a preliminary check-up as is the case whenever there is an improper circulation of trial information," Orlando said. Crocetta said later in the day that the Sicilian Mafia was behind the smear campaign against him. Recent criticism of his management of the region, along with the surfacing of what he said is a doctored or non-existent wiretap, were the work of "the real magic circle, that of business which is in cahoots with masonry and the Mafia, which no longer carries out massacres but is now embedded into regional affairs", he told the Sicilian regional assembly.
The governor went on to say he will not call early elections.
"False scoops cannot decide the fate of governments," he said, adding that "shady powers are threatening democracy". The PD component of the ARS said it will stand by its governor.
"I no longer have any doubts as to that wiretap, they ended when the Palermo prosecutor denied its existence," said PD whip Antonello Cracolici.
"We will try and heal the wound, which I know will be difficult".
Also on Thursday, Codacons consumer association offered the embattled governor psychological assistance amid concerns over his alleged suicidal thoughts. On the day the wiretap allegations surfaced, a weeping Crocetta went on record saying "I could have done myself in".
Three days later he claimed "someone wanted to stage a coup, they wanted to bring about my resignation or my suicide". "We believe these are very serious declarations that should not be underestimated," Codacons said in a statement. "A regional governor needs to have the strength to tackle critical situations such as the one facing Crocetta, and he should never, under any circumstances, consider the possibility of suicide".