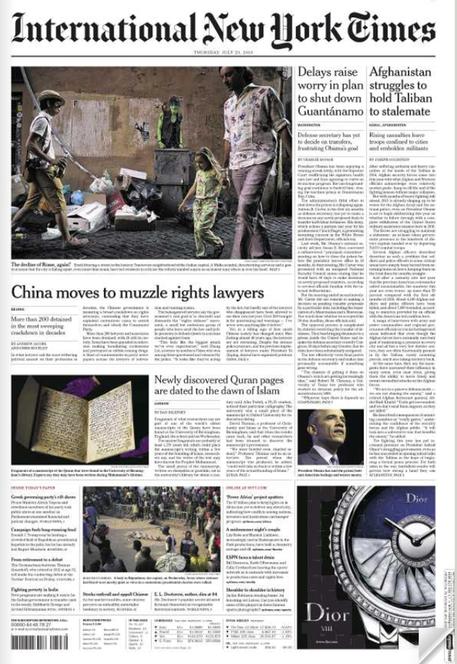 (ANSA) - Rome, July 23 - Rome Mayor Ignazio Marino on Thursday seemed unperturbed by a New York Times article on the 'degradation' in the city, preferring to play up the 'virtues' of the report instead.
"The title is very nice, I liked it a lot," Marino said in reference to the report headlined 'A virtuous mayor versus Rome's vice' appearing on the front page of the print edition of the International New York Times. He also took issue with ANSA for allegedly mistranslating the title in its first dispatch.
However, the agency subsequently clarified that the confusion was due to the fact that the same article had appeared under three different headlines on three different platforms.
It appeared in the New York edition of the paper with the title 'The Mayor's Honest, but Is That Enough to Halt the Eternal City's Decline?', and on the paper's website as 'Romans Put Little Faith in Mayor as Their Ancient City Degrades'.
Marino dismissed the charge implicit in this last title as "the evaluation of a handful of journalists".
The article lists the many problems facing the Eternal City and its residents, from unkempt public parks to strikes by public transport workers and the so-called Mafia Capitale investigation into alleged infiltration by criminal organisations into contracts in the city. "I was surgically aggressive from the very beginning," Marino, a heart surgeon by profession, is quoted as saying. "I don't give a damn about what the political agreements were before I arrived," he added.
"The most important thing to me is to run the city in an honest and transparent way," Marino said.
The New York Times reports that many Rome residents and commentators credit the mayor for his honesty, but registers frustration that he is not getting more done. "Marino is a Martian in Rome, which is fascinating, but tiring," Marco Damilano, a political commentator and city resident, told the paper.
"Rome is in ruins. If he starts acting, he and the city can come out of this stronger," he said.