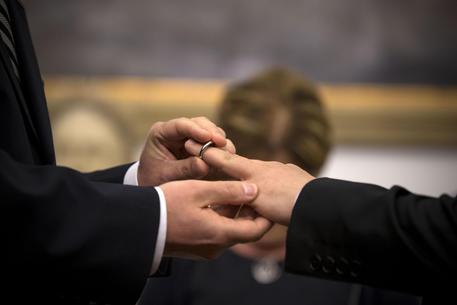 (ANSA) - Strasbourg, July 21 - The European Court of Human Rights on Tuesday condemned Italy for failing to provide legal recognition for same-sex couples, and said the State must remedy that with new legislative measures.
The Strasbourg judges denounced Italy for violating the rights of three same-sex couples by not recognizing their unions, and thus failing to respect their legal and human rights.
"The legal protection currently available in Italy to same-sex couples...not only failed to provide for the core needs relevant to a couple in a stable and committed relationship, but it was also not sufficiently reliable," the human rights court said in its ruling.
The court also ordered the State to pay damages of 5,000 euros to each of the three gay couples who brought the case against Italy to Strasbourg.
Premier Matteo Renzi has said his government would introduce laws on same-sex unions this year.
In February, Italy's highest appeals court rejected same-sex marriage, saying there was nothing in the Constitution that requires the government to extend marriage rights to gays.
However, the Cassation Court added then that homosexuals have the right to a "protective" law that would ensure same-sex couples have the same rights as unmarried Italian couples.
Neither same-sex marriage nor civil unions between same-sex partners are legally recognized in Italy but some cities, including Rome, have a civil union register.
The three couples in the case have been together for years, living in Trento, Milan and Lissone, and all had asked their municipalities to recognize their marriages.
The European Parliament in March called on EU member States that have not already done so, to recognise civil unions and same-sex marriage as a civil and human right.