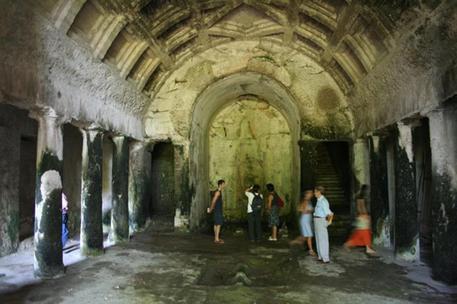 (ANSA) - Rome, July 21 - Formia Mayor Sandro Bartolomeo has launched a public appeal to save the architectural treasure commonly known as Cicero's Villa, which served as the ornate home of the ancient Roman consul and orator and was purchased by a private family between 1867 and 1868.
"From the time of the sale until now, there hasn't been any intervention," Bartolomeo said.
He said if the property remains abandoned, it will collapse.
"It would be better if they told private buyers that you can't acquire a piece of history and then leave it to deteriorate," Bartolomeo said.
"Archeology doesn't end at Rome," he said, adding that Lazio Regional Governor Nicola Zingaretti and Culture Minister Dario Francheschini are also "very informed" of the cause.
Bartolomeo said his office is working "with great synergy" together with institutions to find a solution.
The structure is officially called Villa Rubino, after the family that purchased it, but was previously owned by Ferdinand II, King of the Two Sicilies from 1830-1859.
The Villa in ancient times had large fish ponds and two nymphaeums - monuments consecrated to nymphs, or nature spirits - decorated with pilasters, Doric columns, vaulted ceilings, marble, and rock images with water fountains.
The villa's original owner, Marcus Tullius Cicero, created it as a spacious and ostentatious retreat from Rome, naming it "Formianum".
The villa is mentioned by ancient writers, including Seneca, who said Cicero was here when assassins sent by his enemy Marc Antony came to seal his fate in December of 43 BC.
"He tried to escape by sea, but was prevented by a storm.
So he took the Via Appia but was caught up to at the point we indicate nowadays as his tomb, even though it's really just a votive," Mayor Bartolomeo said.
Seven years ago, Bartolomeo proposed purchasing the two-hectare property from the Rubino family, but the deal didn't go through due to internal family squabbles.
A small groundswell of support has grown in the form of the Italian Environmental Fund (FAI), which has ranked the site as number one in its list of "Beloved Places to Save in the Lazio Region".