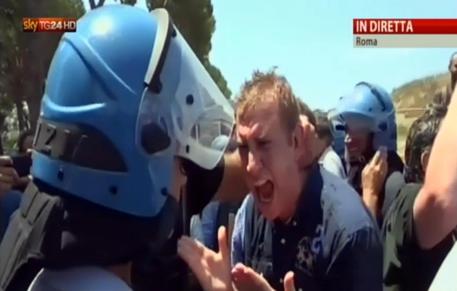 (ANSA) - Rome, July 17 - Police on Friday clashed with a group of protestors who had set up a road block against the arrival of a group of refugees in a northern suburb of Rome as they broke through the cordon. The police responded with a baton charge after coming under a barrage of objects at Casale San Nicola, including sun umbrellas and chairs. Earlier on Friday, Rome Prefect Franco Gabrielli said that the road block would be cleared and the transfer would go ahead as planned. "We have sent 19 people who must stay in Casale San Nicola and there is a road block of citizens who do not allow them in," Gabrielli said. "At the moment they (the refugees) are in vehicles but they will enter the centre because we'll remove the block. We won't take any steps back".