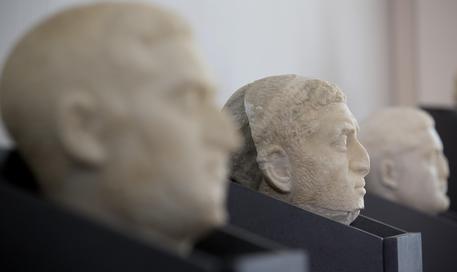 (ANSA) - Rome, July 15 - Busts of five male heads, dating from the second or third century AD and recently excavated from the Roman Villa of Gianola, are going to display at the archaeological museum in Formia.
The carefully carved hair curls around the sculpted face and deep-set eyes of one suggests the future emperor Marcus Aurelius or possibly his son Commodus, analysts say.
Other faces seem equally contemporary to what has been described as one of the most ambitious Roman houses of the era to be found overlooking the Gulf of Gaeta. The busts were discovered approximately one year ago during excavations in the area of the Villa of Gianola, about 120 kilometres south of Rome.
Experts say the villa may have belonged to a a dissolute knight named Mamurra, who became rich in the wars in Gaul and Spain.
That allowed him to build the villa on three levels, with spa facilities so ornate that it could compete with its illustrious neighbours, says Alfonsina Russo Tagliente, Lazio regional superintendent of archaeology.