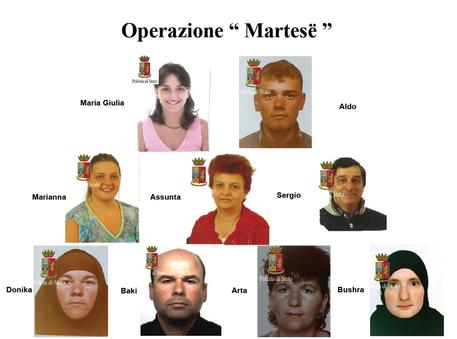 (ANSA) - Rome, July 1 - Italian police on Wednesday arrested in dawn raids 10 people from two families who were allegedly about to leave the country to fight in Syria as part of a vast anti-terrorism operation, ANSA sources said. In a separate operation, Carabinieri police arrested two North African people - a Tunisian and a Moroccan - as part of a probe by Rome prosecutors into an alleged al-Qaeda-inspired Islamist cell planning attacks in Italy.
The first set of arrests were made in provinces of Milan, Bergamo and Grosseto and in a town in Albania. Four of the suspects were Italian converts to Islam. Five Albanians and a Canadian national were also arrested. Among those arrested were the parents and sister of Maria Giulia Sergio, a 27-year-old Italian convert to Islam who in 2011 married Aldo Kobuzi, an Albanian man who trained in Iraq for jihad.
Sergio's father, mother, and sister were converts to Islam.
Sources say Sergio - who goes by the name "Fatima Az Zahra" on Facebook - and Kobuzi, along with Kobuzi's mother, are currently fighting with ISIS in Syria.
Police also arrested Kobuzi's aunt, Arta Kacabuni, 41, in Arcille di Campagnatico in the province of Grosseto and his uncle, Baki Coku, 37, who also lives in the province of Grosseto but was arrested in Albania where he was currently traveling. Coku, who was visiting family in his hometown of Lushnje, is expected to be extradited to Italy.
Sergio is a native of Torre di Greco in the province of Naples and was public in her support of jihad on her Facebook page.
She posted photos of women wearing the face veil known as a niqab, and in a post from December 2010 wrote "Allah strengthen our legs to give us victory over the miscreants".
Her last post is dated November 2013.
Sources say Sergio, who was married to a man from Morocco prior to marrying Kobuzi, took a flight from Rome to Istanbul where she then crossed the Turkish border into Syria to join ISIS.
Investigators said they intercepted messages sent by Sergio in which she took delight in the January 7 attack on French satirical magazine Charlie Hebdo in which 12 people were murdered.
"A thing so appreciated by the faithful," the message read.
"God is great. Two of the Mujahideen have killed the cartoonists who offended the prophet of Islam in France". The two suspects arrested in the other operation were named as Abderrahim El Khalfi Abderrahim, 37, born in Azemmour in Morocco, and Tunisian Ahmed Masseoudi, 29, from Le Kef.
A third person, a Moroccan, who was already in jail in Morocco, is also under investigation. He was named as Mohammed Majene, 27, from Oujida. Investigators said the suspects aimed to "plan and execute terrorist acts in Italy and North Africa". The three are accused of international terrorism. They are suspected of using the Internet site 'i7ur' to advocate jihad and recruit supporters, police said.
Among other things, they celebrated the 2013 'martyrdom' in Syria of a 19-year-old Algerian man, Khaled Amroune, holding him up as an example of someone who moved from espousing Islamism to actually fighting for the cause.