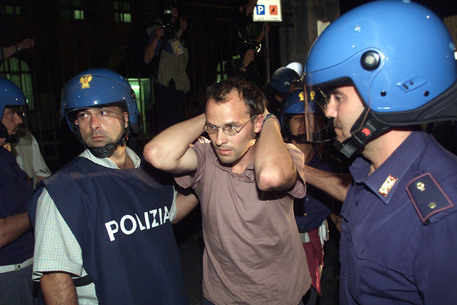 (ANSA) - Rome, June 23 - Interior Minister Angelino Alfano said Tuesday that he would not allow the approval of a torture law that specifically targets the police. "We have battled to stop the conception of a torture felony against the police," Alfano said. "One thing is having the crime of torture, another is that the measure specifically hits the police". The issue has been on the agenda since April, when the European Court of Human Rights (ECtHR) condemned Italy for police brutality in a July 2001 raid on anti-globalization protestors at the Genoa G8.
The court condemned Italy not only for what happened to the demonstrators during the infamous raid on the Diaz school, but also because it said the country lacks appropriate legislation to punish the crime of torture even though it ratified a UN convention on torture in 1988.
Premier Matteo Renzi's government has pledged to fill this vacuum.
But Alfano said Tuesday that a new torture law must not a stick to hit Italy's police forces with, arguing they were clean and that the Daiz raid was a "closed chapter". "We do not intend to disarm the police, not in terms of their instruments, nor in term so their spirit," Alfano told a meeting of police unions.