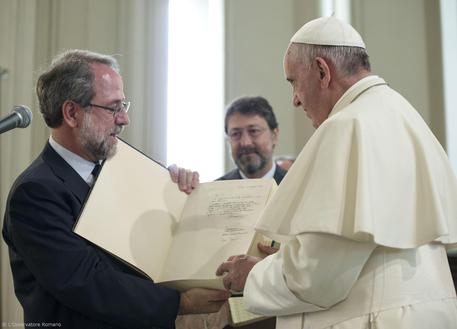 (ANSA) - Turin, June 22 - Pope Francis asked forgiveness in Turin on Monday for the Catholic Church's past persecution of members of the Waldensian church after becoming the first pontiff to visit a Waldensian house of worship.
"On behalf of the Catholic Church, I ask forgiveness for the un-Christian, and even inhuman, attitudes and behaviours we have had against you during history," the pope said.
"In the name of Lord Jesus Christ, forgive us".
Francis said that unity between faiths "does not mean uniformity" and differences are acceptable.
However, diversity was not always accepted and in the past has been a cause of violence and disputes "committed in the name of the faith itself", the pope added.
It was therefore important to pray for the grace "to recognize that we are all sinners and to know to forgive one another".
Meanwhile, Francis had lunch and later celebrated Mass with a large group of his relatives at the archbishop's residence in Turin.
Although the pope was born in Argentina, his father was born in the northern Italian region of Piedmont and around 30 of Francis's relatives - six cousins and their families - came to visit him Monday, Vatican Radio reported.
As well, on Sunday, the pope briefly visited the Church of Santa Teresa, where his paternal grandparents Giovanni and Rosa Bergoglio Vassallo were married in 1907, and where his father Mario was baptized the following year, Vatican Radio said.
The Holy See Press Office said in a statement that Francis used the opportunity to emphasize the importance of family, Pope made this gesture to reiterate the value of the family ahead of the Synod on the family scheduled for October.
Francis viewed his trip to Turin as a "homecoming", adding that the warm welcome he received went "beyond his expectations," according to the Holy See statement.
http://popefrancisnewsapp.com/