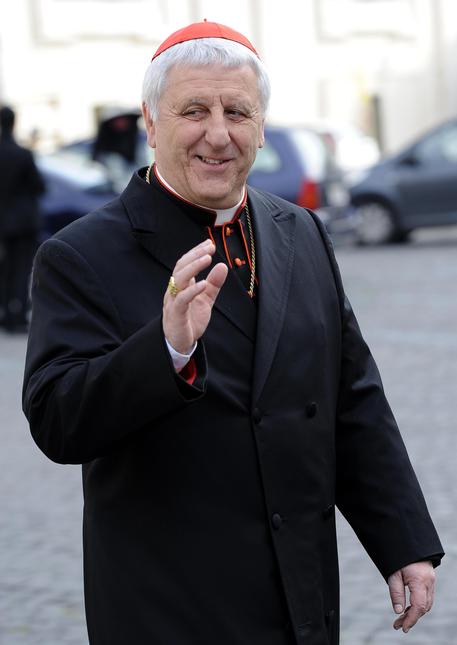 (ANSA) - Rome, June 19 - An Italian cardinal has been caught on a police wiretap allegedly claiming he deliberately kept Pope Francis in the dark about a 30-million-euro financial move he was planning to make.
Although he is not under investigation and denies all wrongdoing, Cardinal Gisueppe Versaldi looks set to be embarrassed by the probe, which is linked to the allegedly fraudulent financial collapse of a southern Italian nursing-home chain run by an order of nuns.
Rome prosecutors have asked colleagues in the southern city of Trani for copies of the case papers, judicial sources said late Friday.
Police said Friday the wiretap of a conversation between Cardinal Versaldi and a manager is among those to feature in the probe into the alleged fraudulent bankruptcy of the Divina Provvidenza (Divine Providence) chain. In the conversation, Versaldi allegedly suggests the pope should not be informed that 30 million euros belonging to Rome's Bambino Gesù children's hospital and stemming from Italian public coffers were to be used for the acquisition of the IDI skin hospital company.
The sum was never eventually used for that or other financial moves, investigators said.
According to transcripts made available by police, Versaldi tells the manager: "You have to keep mum about this 30 million euros".
Bambino Gesù Hospital denied any links to the Divina Provvidenza investigation.
"Bambino Gesù Hospital categorically denies that funds from its own budget or from public funding were ever used in the purchase of the IDI Hospital," said Bambino Gesù Hospital President Mariella Enoc, who was nominated to her post in February by the Vatican's Secretary of State, Cardinal Pietro Parolin.
"Not even one euro (of the hospital's money) is taken away from clinical, research, or organizational activities that regard the hospital and its patients," Enoc said.
Meanwhile a centre-right Senator who has been linked to the probe on Friday presented an appeal against an arrest warrant which an immunity panel in the Italian parliament has yet to rule on.
A lawyer acting for the chair of the Senate's budget committee, Antonio Azzollini, presented the request Friday for the annulment of the arrest warrant.
In the document presented to the Bari warrant review court, Azzollini's lawyer challenged Puglian prosecutors' assertion that there is "grave evidence" against the politician from the New Centre Right (NCD) in relation to the bilking of the funds used by the Order of Divine Providence for a string of nursing homes for old people and the mentally ill.
The arrest warrant was passed by judicial authorities to the upper house June 10 and a special parliamentary panel will decide in coming days whether to recommend that Azzollini's parliamentary immunity be stripped, a decision that will have to be ratified by a parliamentary vote.
Azzollini faces charges of criminal conspiracy for fraudulent bankruptcy and corruption.
In the probe, on June 10, two nuns were arrested and a request to arrest Azzolini filed, prompting investigators to say the case highlighted the progress made by the Vatican Bank towards full transparency of its formerly opaque affairs.
"The IOR's collaboration was precious," prosecutors told reporters.
"From today I'm the one in charge here," Azzolini is heard saying in a wiretap obtained in the case, when he allegedly took over running the chain.
Azzolini's "reign of terror", investigators said, was marked by a spate of "wild and totally indiscriminate hirings of chain staff linked to him".
He was also prone to "vulgar intimidation of the sisters," they said, allegedly saying he would "piss" on them if they ignored his orders.
Azzolini denied making the statements published in the wiretaps.
The two nuns arrested in the probe in Puglia were among the most senior members of the Ancelle Congregation of Divine Providence.
Also arrested were a former director general, administrators and consultants of the order. In all as many as 25 people are under investigation on charges of embezzling funds from the foundation.
Established to give a voice to the voiceless by helping old people unable to look after themselves, the religious order "seems to have completely reneged on its founding canons," a statement by the prosecutor's office in Bari said.
Investigators said the Institute for Religious Works (IOR), the Vatican Bank, allowed investigators to "close the circle" in their probe.
Replies supplied by the Holy See bankers allowed investigators in Puglia to undertake "a more pregnant technical examination" of financial flows through bank account data in which assets of the Congregation of Divine Providence had been hidden, judicial sources said.
Meanwhile it was disclosed that a Socialist MP, Raffaele Di Gioia, was also among those under investigation in the probe which appeared to be widening.
Finance police confiscated 32 million euros and a building that the nuns were planning to turn into a private clinic in Guidonia in Rome province.
The money and the building were held in the names of parallel church orders run by nuns from the Divine Providence congregation.
As much as 350 million euros of the total debts of half a billion euros run up by the congregation were debts to the Italian state.
The order also had a secret bank account in which donations from the faithful were stashed.
Part of the money was used to finance a campaign for the beatification by the Church of the founder of the order, Don Uva.