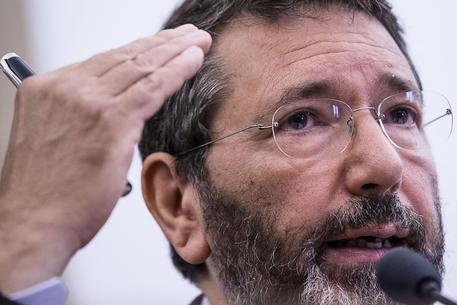 (ANSA) - Rome, June 18 - Rome Mayor Ignazio Marino said Thursday that he intends to remain in the job until 2023 - gaining re-election after his current five-year term ends in 2018 - despite widespread calls for his resignation amid a mafia scandal and after receiving a lukewarm endorsement of his city management skills from the leader of his ruling Democratic Party (PD), Matteo Renzi.
"I have never changed my mind, I am here to stay until 2023", said the mayor, who has been under pressure over the growing Mafia Capitale scandal involving criminal infiltration that allegedly began under earlier centre-right and centre-left administrations in the Italian capital.
In the probe, it has been claimed that an alleged crime ring made up of politicians, businessmen and gangsters muscled in on lucrative city contracts Marino, who is a heart surgeon, said he won't judge people's comments until "the end, when the patient, after resuscitation, embraces family members and returns home".
Marino's defiant announcement came after Renzi earlier this week said the mayor should stay on "only if he shows he can govern" a complex city like Rome.
And the mayor's prediction that he could win re-election was met with a thunderous silence by Renzi and most other PD bigwigs.
The only heavyweight to chime in was former Renzi aide, Transport Minister Graziano delrio, who said: "I'm not saying Marino should take a step back...He's an extraordinarily honest person, who should listen to the Romans and verify what they are saying".
The mayor's vow to stay on, and hopefully prevail again, also came on the same day the anti-establishment 5-Star Movement (M5S) of former comedian Beppe Grillo called for Marino's head, saying "the critical elements unearthed by the Mafia Capitale probe are all still there".
The M5S highlighted that the city's former housing councillor, Daniele Ozzimo, now under house arrest, "was chosen by Marino".
In contrast to Renzi's tepid assessment of Mario's abilities - attributed by some commentators to a desire to deflect the spotlight from disappointing local-election results - PD Chairman Matteo Orfini, appointed as commissioner for the party in Rome, has been keen to stress that Marino was not responsible for the Mafia Capitale case.
If anything, Orfini has pointed out, many of the criminal probes in the sprawling case were opened after Marino asked prosecutors to step in.
Marino, whom surveys say is unpopular for a fall-off in the level of municipal services, has also been supported by other leading members of the party.
The media, however, have widely depicted Renzi's views on the mayor's competence as a vote of no confidence.
Marino has declined to comment on Renzi's remarks.
In another development in the Mafia Capitale probe Thursday, the parliamentary intelligence services oversight committee COPASIR said it was going to look into the case, primarily to look at claims that agents may have been in touch with the alleged ringleader, former rightist terrorist and gangster Massimo Carminati.
Meanwhile a Rome court upheld the pretrial detention of 14 suspects in the probe.
Leftwing cooperative chief Salvatore Buzzi, Carminati's alleged No.2, as well as suspects Claudio Caldarelli and Paolo Di Ninno, are to remain behind bars.
City councillors Massimo Caprari, Pierpaolo Pedetti, and Giordano Tredicine, plus former city manager Angelo Scozzafava - who faces charges of mafia-style criminal association - are to remain under house arrest.
Stefano Bravo, Emanuela Bugitti, Buzzi girlfriend Alessandra Garrone, and Guido Magrini are also under house arrest.
Suspect Mario Monge was set free, but with an obligation to report to the police.
Buzzi - who faces charges including corruption and mafia-style criminal association - has entered a plea bargain of three years six months.
Meanwhile the Senate on Thursday approved a bill aimed at avoiding repetitions of the kind of bid-rigging seen in Mafia Capitale and a host of other scandals involving all sides of the political spectrum.
The bill aims to make bidding for public contracts more transparent.