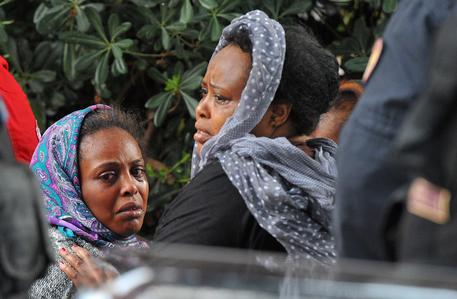 (ANSA) - Rome, June 16 - Premier Matteo Renzi said Tuesday if the European Union fails to agree on a migrant policy, Italy will deal with it on its own.
"There are two ways to face the problem - either the EU does it, or Italy does it," he said. "I say the conditions are there for Italy to make itself heard...if 30-40,000 out of 80,000 asylum seekers are redistributed, that would be a wiser way to manage it".
Renzi went on to say Italy must keep "temporary residence permits as a reserve weapon" in case the European Union fails to agree. "If you want my opinion there will be an agreement," he added. "The EU can't allow itself to just be a currency, it's in their interest".
The premier's comments came after a day of tensions in the Italian border town of Ventimiglia, where police earlier forcibly evacuated some 100 asylum seekers who had been camping out at the French border for days after France refused them entry.
The situation has caused tension between Italy and France, with Renzi complaining about Paris' "muscular" approach.
However French Interior Minister Bernard Cazeneuve told a joint press conference with his Italian and German counterparts Tuesday that "the situation is difficult at Ventimiglia for Italy, it's difficult for France, but there's no clash, there's a will to work together to make sure EU rules can be applied" to promote solidarity over the migrant crisis.
Interior Minister Angelino Alfano said that a meeting with his European counterparts on the migrant emergency had achieved some "very positive things". Alfano said there was a "good climate" during the talks. "We judged the Commission's Agenda (on migration) to be a first step, both in terms of breaking down the wall of (the) Dublin (Regulation) and on repatriations," he added. "We obtained some very positive things and in some cases there were significant openings (of positions)". The Dublin Regulation is the EU law that determines that the country where an asylum seeker arrives is responsible for processing their claim. Italy, which is bearing the brunt of the Mediterranean migrant crisis due to its long coastline and proximity to North Africa, say this system penalises it. The run-up to Tuesday's meeting was soured by a row between France and Italy, after Paris refused to let asylum seekers pass though at the border city of Ventimiglia. Before the meeting France and Germany said they were presenting a proposal "for a compromise" on migrants after both Paris and Berlin expressed reservations about the European Commission's proposal to relocate 40,000 asylum seekers from Italy and Greece to other parts of the EU. The proposal will have the support of many countries, German Interior Minister Thomas De Maiziere said Tuesday at a joint press conference with his French counterpart Bernard Cazeneuve. "There won't be a result on this (French-German proposal), but there might be a corridor leading to a compromise," De Maiziere said. Renzi warned his EU counterparts that Italy has a "plan B" ready if it does not get more help from the union. Alfano said Tuesday at a joint news conference with his French and German counterparts that more talk is needed on migrant "numbers" but said the concept that the relocation should be mandatory had been accepted.
Italy has "asked and obtained" from the EU that migrant resettlement quotas superseding the Dublin accord should be "binding on all" member nations, Alfano said. "There's a widespread awareness that Dublin isn't working any more," he said.