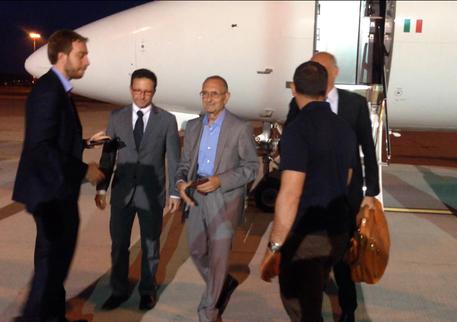 (by Benedetta Guerrera) (ANSA) - Rome, June 15 - Ignazio Scaravilli has returned to Italy: several days after his release was announced, the nightmare has ended for the doctor from Catania who 'disappeared' in Libya in January. According to an announcement made to ANSA by a spokesman of the self-proclaimed government of Tripoli, Jamal Zubia, the Italian national left the city's airport bound for Rome last night at around 7:30 pm local time on a ''special flight''. The report was immediately confirmed by the Italian foreign ministry, which stressed that Scaravilli is in ''good health condition'' and that he travelled on a State flight together with the head of the crisis unit of the foreign ministry, Claudio Taffuri.
However, although after six long months the case has had a positive ending, many issues have cast a shadow on a 'disappearance' that is still not fully clear. Since January 22 - the day in which some colleagues announced he had been missing since January 6 - until June 9, when the Italian foreign ministry announced his release, no information was actually available on the Catania doctor. For its part the foreign ministry, in order to maintain the discretion it keeps in such cases, has continued to use the term ''untraceable''. On the other hand, the media alleged the abduction could have been carried out by a radical group close to Ansar al-Sharia. Then six days ago, his release was announced while sources close to the foreign ministry's crisis unit said Scaravilli was at the offices of Tripoli authorities to fulfil the usual obligations.
But days were going by without the family being able to hug him once again and hypotheses abounded on the unusual delay in the history of international abductions. Among the first theories, Andrea Purgatori wrote on the Huffington Post that the doctor had ended up in the middle of a 'diplomatic' strong-arm between Rome and Tripoli, with the latter saying it would not release the man unless Italy recognized its government supported by pro-Islamist militias from Fajr Libya.
Yesterday, a few hours from his release, another hypothesis emerged directly from the self-proclaimed government of Tripoli.
According to this theory, Scaravilli was not kidnapped but arrested and detained by the local secret services. ''Ansar al Sharia and Isis have nothing to do with it'', the doctor was ''under investigation and now that the probe has been closed they have asked the foreign ministry to summon Italians to hand him over'', said spokesman Zubia, referring to Tripoli's secret services. ''The intelligence forces thought that he was making suspicious calls and so they took him for investigations'', added Zubia, director of the government's department of foreign media. ''Now that a supplement of investigation has been made, he has been released''. There is no certainty on the type of investigation carried out or the charges against the doctor, however. ''These are intelligence reports, I don't know them'', said the Tripoli spokesman, adding nevertheless that ''some believe that he had some connection or contact with the mafia and arm traffickers''. These reports cannot be verified and there is ''no solid evidence'' on them, he cut short. Now Scaravilli has returned to Rome, where he will be questioned by Italian investigators to shed light on the case.