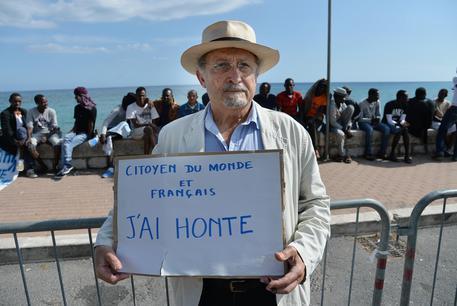 (ANSA) - Brussels, June 15 - French Interior Minister Bernard Cazeneuve said Monday that France will not allow asylum seekers to cross its border with Italy, arguing it was up to Rome to process their requests. "We've returned some 6,000 migrants to Italy (since the start of the year)," Cazeneuve said.
"They must not pass. The Schengen rules must be respected".
He said Italy must "agree to set up centres" to distinguish legitimate refugees from economic migrants.
Italian Premier Matteo Renzi replied that the "muscular stance of certain ministers of friendly countries (on the migrant crisis) goes in the opposite direction" from "Plan A, which is to all face the issue together". He said Italy "must shoulder the burden and is doing so, it's saving hundreds of lives and will keep doing so".
"A solid country such as ours can't allow France to have ships in the Mediterranean and leave (migrants) in Italy," Renzi went on.
"No national egoism (should be allowed to) look away," he told a press conference at the premier's office. Renzi added his plan B on immigration is Italy doing it all on its own. "The EU is at a crossroads," he said. "Plan A is it thinks like a community and solves the problem as such...plan B is we do it alone, and Italy faces up to the issue like the great country it is".
The Commission has proposed relocating 40,000 asylum seekers already in Italy and Greece to other parts of the Union, following a mandatory quota system.
That plan has divided the EU, with many states, including France and Germany, coming out against the obligation to receive the asylum seekers. Renzi, on the other hand, says the proposal does not go far enough. "We believe we have found a good balance," Bertaud said of the proposal, which will be examined by EU interior ministers on Tuesday before being discussed at the June 25-26 summit of European leaders. "We want the relocation system to be mandatory". The EC proposal is part of its Agenda on Migration which also features the tripling of funding for migrant rescue operations in the southern Mediterranean and the launch of a naval operation to target human traffickers. Renzi's talk of a plan B was seen as a challenge to his fellow EU leaders, with the migrant emergency visibly becoming difficult to handle and asylum seekers camped out at train stations in Rome and Milan and in the city of Ventimiglia on the border with France. UN High Commissioner for Human Rights Zeid Ra'ad al-Hussein on Monday urged the European Union to take "brave steps" on immigration. The EU has the capacity to "provide asylum...to one million refugees fleeing wars in Syria and elsewhere," Hussein said.
The commissioner went on to blast the "frequent demonization of migrants in countries that enjoy peace and wellbeing...I ask all of you to take a stand against this very dangerous tendency," he said.