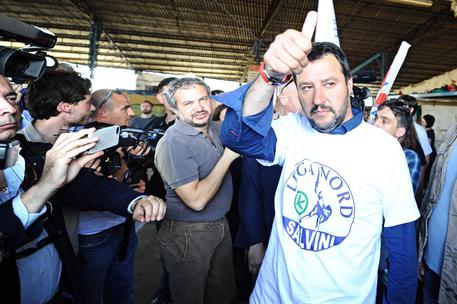 (ANSA) - Rome, May 29 - The head of an NGO supporting Roma and travellers charged firebrand Northern League leader Matteo Salvini Friday with being "like Hitler," saying he had "instigated racial hatred" in the wake of public outrage over a fatal car accident involving Roma youths in Rome.
"Salvini like Hitler? The incitement to hatred and his propaganda is very similar to what happened in Germany in the 1930s," Dijana Pavlovic, head of the "Roma-Sinti Together Foundation, told Radio 24.
"I hope not to compare anyone to Hitler today or in the future," she said, "but only yesterday I brought an action against the League's (Gianluca) Buonanno who in a television broadcast called me 'scum of society'. That is the principle under which the Nazis exterminated half a million people".
Asked if Salvini was like Hitler, Pavlovic was quoted as saying "Salvini instigates racial hatred, now anybody is allowed to say whatever they want, later I don't know what they will allow themselves to do".
Speaking about an accident in which a woman was run down and killed by a car driven by speeding teen fugitive Roma in the capital, Pavlovic said "nobody denies that there are problems in the Roma camps".
"The politicians and the police have turned a blind eye.
There have never been serious policies to integrate the Roma, there have only been policies to do business, policies with which everyone got fat, except the Roma."