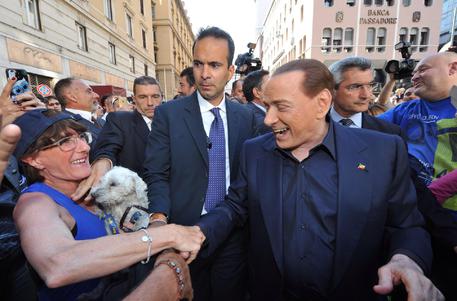 (ANSA) - Genoa, May 28 - German Chancellor Angela Merkel and that country's central bank deliberately manipulated interest rates in 2011 to widen the spread and "hit me politically," ex-premier Silvio Berlusconi said Thursday.
In an interview with Telenord television, Berlusconi said he was forced to resign in late 2011 because of the widening rate spread that he said was due to a political conspiracy.
That also involved then-French president Nicolas Sarkozy and officials from Finland who all wanted to be rid of Berlusconi, the head of the slumping Forza Italia (FI) political party said.
Berlusconi said the Bundesbank ordered Germany's commercial banks to sell off Italian bonds to shake up markets.
As a big investor in insurer Mediolanum, said Berlusconi, he had direct knowledge that that firm "was obliged by force" by Bundesbank to sell Italian bonds.
Spreads between Italy's 10-year bond and its German counterpart, widely considered to be a safe investment, were as wide as 500 basis points with yields above 7% in late 2011, reflecting investors' fears of a Greek-style meltdown at the height of the sovereign debt crisis.
The spreads opened Thursday at just under 135 basis points, suggesting investors' fears around Italy's economy have largely calmed. Meanwhile, Berlusconi also suggested that he had to fight hard to see European Central Bank (ECB) President Mario Draghi - former head of the Bank of Italy - promoted to the ECB position.
Berlusconi previously called for a parliamentary inquiry after a conspiracy against him was suggested in a book by former US Treasury secretary Timothy Geithner.
He wrote that at a G-20 meeting in 2011, Europeans were pushing the White House to get involved in pressuring Berlusconi out of office at the peak of the eurozone crisis.
Investor confidence in the three-time premier hit an all-time low in 2011.