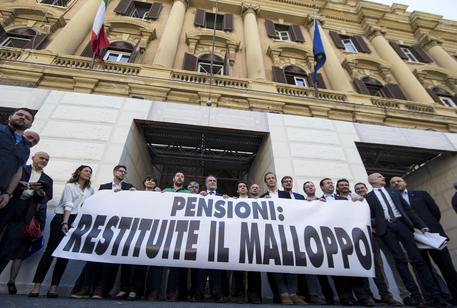 (See related) (ANSA) - Rome, May 12 - As his Northern League political party held a sit-in at the finance ministry Tuesday, leader Matteo Salvini demanded the government dip into its "boatloads" of cash to repay billions of euros in pension money withheld under a previous cap.
Salvini and his supporters, riding high in public opinion polls and following a strong showing in weekend local elections, alleged the centre-left government is sitting on billions of euros they could pay to pensioners.
"Here we stay until we get some answers," said Salvini.
"Return the loot" and "Hands off pensions" read League banners as Salvini said the government could afford to repay what some estimates say is about five billion euros in money withheld under a 2011 pension cap struck down last month by the Constitutional court.
The original reforms affected only pensions greater than three times the average paid by INPS.
He said pensioners had been "robbed" by the original regulations and urged the government to dip into its "boatload" of cash.
Premier Matteo Renzi's government has said it must avoid spending that would push the budget outside strict European Union fiscal rules.
Salvini said Economy Minister Pier Carlo Padoan had taken a "disgraceful" attitude, and accused the government of preferring to repay pensioners in supermarket points rather than the cash they were owned.
Padoan has said the government will have a plan this week for refunding some of the pension money.