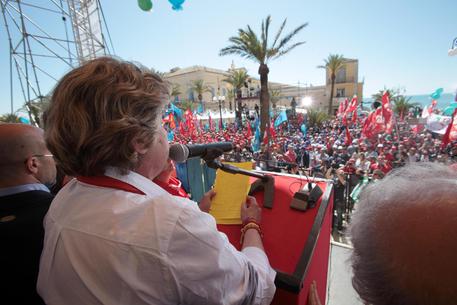 (ANSA) - Ragusa, May 1 - CGIL union federation leader Susanna Camusso on Friday urged the government to do more to fight unemployment as she celebrated May Day at a joint rally with other labor federations in the Sicilian city of Pozzallo, near Ragusa.
"The government ought to be obsessed with creating jobs," said Camusso in her speech.
Premier Matteo Renzi's job-creation policies have been negated by recent unemployment numbers, which show joblessness on the rise "especially among young people," she said.
She called on Italians "to return to the spirit of the Constitution", whose Article 1 says "Italy is a democratic Republic founded on work". Along with CISL leader Annamaria Furlan and UIL chief Carmelo Barbagallo, she threw a wreath into the sea at this Sicilian port in memory of the migrants who died trying to reach Italy.

CGIL trade union federation chief Susanna Camusso marked May Day Friday by calling for reform of a 2011 pensions law she said was "rife with injustice" and a cause of unemployment. Speaking at a Labor Day rally in the Sicilian port city of Pozzallo, Camusso noted that the Constitutional Court on Thursday struck down as illegitimate a section of the so-called Fornero law that froze the indexation of pensions worth three times the minimum pension. The pensions cap "was an unjust rule and the Constitutional Court confirmed this," Camusso said. "We need to get our hands on the Fornero law, which is rife with injustice and one of the reasons for the increase in unemployment". "We said at the time that it was a mistaken measure," said Camusso. Italy's Constitutional Court on Thursday rejected pension caps in the 'Save Italy' measures from 2011 aimed at saving about 5 billion euros in government spending. The aim of the measures announced by the emergency technocrat of ex-premier Mario Monti government was to "equalize" high pensions by suspending some inflation indexing so as to save - by some estimates - about 1.8 billion euros in 2012 and three billion euros in 2013. The measures were to affect only pensions greater than three times the minimum pension provided by national agency INPS.