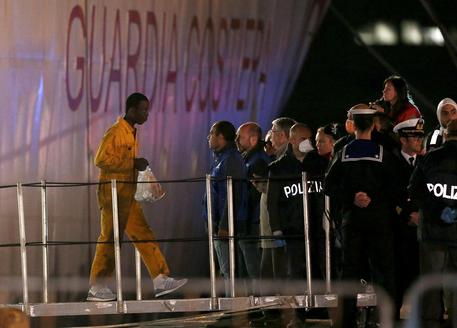 (ANSA) - Rome, April 21 - The European Union is mulling a "military operation" targeting human traffickers in the Mediterranean in the wake of last weekend's migrant-boat disaster in which hundreds died, European Commission Spokesperson Natasha Bertaud said Tuesday. The European Commission presented a 10-point plan Monday including destroying smugglers' boats on the Libyan coast. This is also part of a five-point Italian plan unveiled Tuesday which includes the possible use of drones. Summing up the proposed response to the worst postwar disaster, Premier Matteo Renzi said Italy will have "concrete talking points" ready for an emergency European Union summit Thursday. These are "intervention in countries of origin, migrant boat destruction, doubling the Triton operation, migrant relocation shared across countries, working with the UN, (and a) joint effort on Libya's southern borders.
"We are determined to obtain solidarity and joint initiatives," said Renzi.
"We are seeing an unprecedented phenomenon in some respects, but sadly for others it was already seen in the days of the slave trade," Renzi said.
"Criminals who take money profiting on human flesh: Italy alone has arrested more than a thousand", the Italian premier said .
In regard to establishing a European policy to address and potential ease the crisis, Renzi wrote "It would be a first step for Europe if written words finally correspond to concrete facts, but there is a still a long way to go".
The "concrete commitments" the EU made after the disaster, however, showed "for the first time that the whole of Europe could display attention and solidarity" on the crisis, Renzi went on to say.
He said Italy will "try to firm up" these proposals before Thursday's summit.
The EU is already looking at a mission along the lines of its successful Atlanta op that destroyed Somali pirates bases, EU sources said.
But member States are split on how much they should contribute, the sources said.
Italian President Sergio Mattarella made another call for the international community to work to avert a recurrence of "tragedies" like the one that occurred off Libya between Saturday night and Sunday morning.
Demanding that more be done to stop disasters, he said: "We are faced with shocking tragedies.
"Traffickers in human beings are provoking the slaughter of innocents. We feel this cutting wound.. It's our duty and that of Europe and the whole international community to do more to prevent these disasters".
Italian investigators said that they estimated that around 850 people were aboard the migrant-boat when it sank after a people smuggler at the helm rammed it into a cargo ship. Rescuers saved 28 people from the wreck. "It has not yet been possible to establish the death toll," investigators were quoted as saying by ANSA sources, adding that survivors have given numbers ranging from 400 to 950 passengers. But they added the survivors' testimony and a report from a Portuguese merchant ship sent to rescue the boat led them to estimate that "there were around 850 migrants aboard".
Some 350 Eritreans were among the feared 850 people who perished in the boat, a United Nations spokesperson said on Tuesday.
U.N. High Commissioner for Refugees spokesperson Adrian Edwards said: "According to survivors heard by UNHCR, the boat left Tripoli, Libya on Saturday with approximately 850 people and many children. "Among the people on board, there were 350 Eritreans, and (others) from Syria, Somalia, Sierra Leone, Mali, Senegal, Gambia, Ivory Coast and Ethiopia".
Among the items on Thursday's summit agenda are stopping people traffickers, trying to restore peace and unity in Libya, spreading the migrant burden, revising the Dublin III charter on where migrants must be processed, setting up way stations in countries of origin and upping rescue operations to previous levels.
Several leaders have said the EU as a whole must do more and the current Triton border patrol and rescue operation must be boosted, while trying to stop traffickers placing desperate people in rickety boats.
Triton took over from Italy's Mare Nostrum search and rescue operation late last year.
It has a third of Mare Nostrum's budget and a much smaller operating range - just 30 nautical miles from coastlines.
The year-long Mare Nostrum, which scoured the seas, saved about 170,000 migrants while Triton has rescued about 30,000.
Some 3,000 migrants died last year while more than half that, 1,600, have died so far this year.
The key problem is averting more loss of life, either by rescuing people or stopping them from setting off in the first place.
Italy's Catholic Sant'Egidio community, which has a record of brokering international peace deals, on Tuesday proposed setting up desks in Libya that would be able to pass out "humanitarian visas" for Europe.
"That way we'll avert these voyages of death," it said. Politicians like the Northern League's Matteo Salvini argue that boosting rescue ops only encourages more migrants to risk their lives.
They also say local politicians around Italy, as well as some associations, are profiting from the migrant-reception industry because of the business it generates for their communities, allegedly at the expense of services for Italians.
Salvini has been criticised for saying Renzi's government has blood on its hands and for proposing a naval blockade on Libya.
His outspoken stances have helped rack up support for the League, which is now Italy's top centre-right party according to most polls.