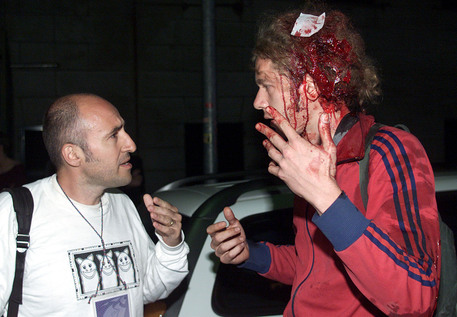 (ANSA) - Rome, April 14 - A Facebook user claiming to be a State Police officer wrote on his profile Tuesday that he was in the unit that conducted a 2001 raid on anti-G8 protesters in Genoa, and that he would do it again.
"I was at the Diaz (school, where the protesters were camping out) that night," Fabio Tortosa wrote on his profile.
"I would go back in there a thousand times".
The European Court of Human Rights (ECtHR) last Tuesday condemned Italy, finding that torture had occurred during the raid. In response, the government sped up a reading of its anti-torture bill, with the Lower House on Thursday approving an amendment increasing the maximum prison sentence for public officials found guilty of torture from 12 to 15 years.
State Police are investigating the authorship of the post and will initiate disciplinary proceedings should Tortosa turn out to be a member of the force, the department said in a statement.
The Diaz raid is perhaps Italy's most notorious case of police brutality.
In the night assault on the Diaz school, hundreds of police attacked about 100 activists and a few journalists, wounding 82 and seriously injuring 61 - three critically and one, British journalist Mark Covell, left in a coma with rib and spinal injuries.
Officers planted evidence including two Molotov cocktails and hammers and knives from a nearby construction site to justify the raid.
Amnesty International called the event "the most serious suspension of democratic rights in a Western country since the Second World War".