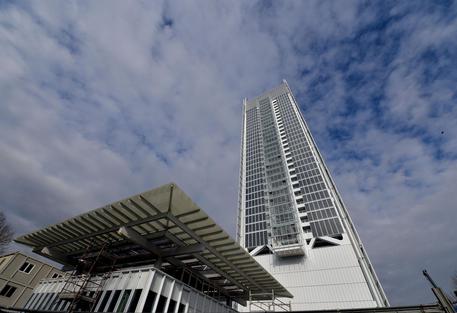 (ANSA) - Turin, April 10 - Top management for Italian bank Intesa Sanpaolo held a ribbon-cutting ceremony on Friday to inaugurate the company's new operational headquarters, a 166-metre skyscraper designed by famed architect Renzo Piano.
The structure required an investment of a half-billion euros and took five years to build, and will now be a workplace for 2,000 of the employees of the bank, Italy's second biggest after Unicredit.
The building is just a couple metres shy of the city's best-known and tallest landmark, the 168-metre Mole Antonelliana, completed in 1889 and designed originally to be a synagogue.
On the ground floor, the tower has a multi-purpose 364-seat "suspended" auditorium, so named because it is hung from the transfer trusses four stories above ground level and thus has no vertical sustaining structures to block views of the city. The roof hosts a bioclimatic greenhouse and restaurant open to the public, as well as a panoramic terrace.
Five hundred workers and technicians participated in the construction project, managed by Italian contractors Rizzani de Eccher.
According to Intesa Sanpaolo's website, the new landmark "is both an environmental and social laboratory and an urban project, with a discreet urbanity that unites it with the city's inhabitants". The building is located on the edge of the historic town center, near Porta Susa Station, at the northeast intersection of Corso Inghilterra with Corso Vittorio Emanuele II.
It is set "at the center of an exceptional concentration of public services and facilities on the metropolitan scale in a zone of strategic importance for the city", the bank said.
The adjoining garden, Giardino Nicola Grosa, has been upgraded and transformed into a "playful" space, it said, with trees of different heights, lawns and neighborhood functions. Access to the garden from Corso Inghilterra is provided by a public gallery that traverses the entrance hall on the ground floor.
Renzo Piano is perhaps Italy's most famous public architect, or 'starchitect'.
The Genoese-born architect, 77, has worked on the designs of many of the planet's modern landmarks, including London's Shard skyscraper, the Pompidou Centre in Paris, the Potzdammer Platz masterplan in Berlin, the Kansai airport in Japan, the Nemo Science Museum in Amsterdam, and the New York Times building in Manhattan.
In addition to winning architecture's coveted Pritzker Prize, Piano has received the Kyoto Prize, Amsterdam's Erasmus award, the RIBA Gold Medal, the Sonning Prize, and the AIA Gold Medal, among other honours.
He has been UNESCO's goodwill ambassador for cities since 1994.
In 2004 he founded the Renzo Piano Foundation, a non-profit organization for supporting young architects based in Genoa.
He was named a life Senator in 2013.