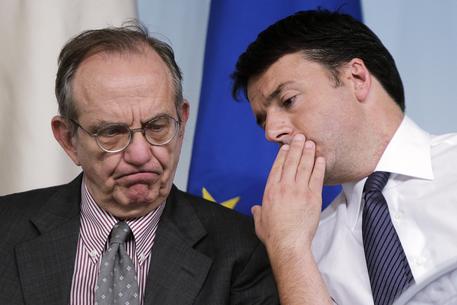 (ANSA) - Rome, April 7 - Premier Matteo Renzi's cabinet is expected to approve some 10 billion euros in spending cuts to avoid tax hikes when it meets Tuesday to review a new economic blueprint, sources said.
Debate on reforms, including measures to avoid a controversial change to the national value-added tax (VAT), is expected to continue until Friday.
The backbone of the plan is comprised of economic forecasts including a recent increase in expectations for growth in Italy's gross domestic product (GDP).
Renzi recently nudged that up to a 0.7% rate of GDP growth this year compared with the previous forecast of 0.6% growth for 2015.
As weak at that may seem, it is still a recovery from a record of as many as 14 quarters without economic growth - since at least mid-2011 - and GDP losses of 0.4% for 2014.
The most recent government forecasts for the national deficit-to-GDP ratio should be confirmed at 2.6% for 2015 in the blueprint, more formally known as the government's Economic and Financial Document (DEF).
Meanwhile, debate is likely over measures to avoid an increase in Italy's value-added tax.
Critics say increasing the VAT could cut as much as 0.7% off GDP by 2018.
A VAT increase from 2016 to 2018 had been proposed as a "safeguard" against an increase in the budget deficit, but the documents suggest the depressive effect on the economy could be great.
The tax would weigh on consumption by the end of the period and also slow investment in the economy, the documents warn. Officials have suggested that instead of raising the VAT, spending cuts of about 10 billion euros could help to keep the budget balanced without endangering growth.
Last week, junior economy minister Enrico Morando warned that it would be "a disaster" if the government were to raise the VAT.
In an interview published in La Stampa newspaper, Morando said that increasing the tax could have the effect of a landmine exploding in the Italian economy.
Italy's basic VAT is 22%, with a lower rate of 10% for goods including food, medicine, books, hotels, some transportation and admission to cultural and entertainment events.
The government's budget bill could have raised the basic VAT to 25.5% by 2018 from the current 22% and increase the lower 10% tax level to 13% during that period.