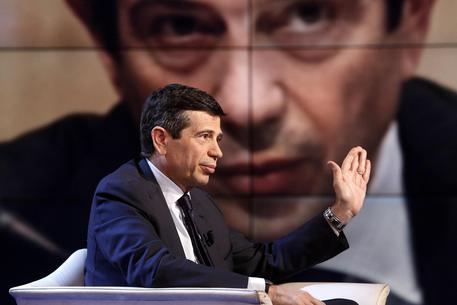 (ANSA) - Rome, March 19 - Beleaguered Infrastructure and Transport Minister Maurizio Lupi said Thursday that he would resign on Friday in the Lower House. He made the statement while recording an appearance on RAI public television program Porta a Porta. Lupi has been under pressure to resign over allegations of a connection to a corruption case involving public contracts. "I think perhaps my decision will strengthen the actions of the government," said Lupi, whose infrastructure ministry was at the centre of many of the contracts in question in the investigation. Lupi was going to be forced to face a no-confidence motion on Tuesday, presented by the opposition Left, Ecology and Freedom (SEL) party and the anti-establishment 5-Star Movement (M5S), ANSA sources said earlier in the day after a meeting of party whips. Lupi had come under fire after allegations he asked for favors for his son from graft suspect Ercole Incalza, a former top executive at his ministry who remained as a key ministry consultant until he was arrested earlier in the week.
Prosecutors said Incalza, a public-works official for seven governments, oversaw "systemic corruption" on a massive scale.
He was arrested Monday along with his aide Sandro Pacella and businessmen Stefano Perotti and Francesco Cavallo in the probe that saw more than 50 people including politicians placed under investigation for suspected kickbacks that inflated costs by as much as 40%. Lupi's son was allegedly hired by an engineer, Giorgio Mor, at Perotti's behest in what a judge said was a favour that might have been reciprocated in some way. The indirect hiring of Luca Lupi by Perotti may have been part of "an illicit quid pro quo" by the minister, a judge alleged. Prosecutors said Wednesday Incalza Lupi, a member of the New Centre Right (NCD) party, was expected to report to parliament on the case on Friday. There was speculation that Lupi was already reflecting on his position and some he said might announce his resignation on Friday, even while maintaining his assertion that he has done nothing wrong. The decision to quit came after Lupi and his party head, Interior Minister Angelino Alfano, met with Premier Matteo Renzi earlier in the day.