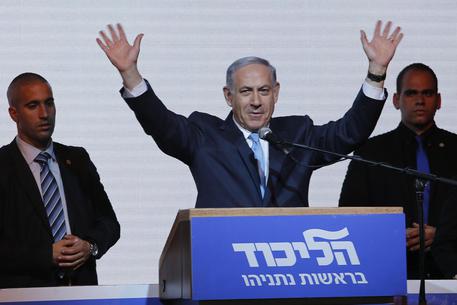 (ANSA) - Tel Aviv, March 18 - With a major success, Israeli Likud leader Benyamin Netanyahu has been confirmed as prime minister in general elections, winning a fourth mandate. As provisional results show a clear lead, he is now able to form a right-wing government backed by nationalist and confessional parties.
''I will form a government in two-three weeks'', Netanyahu was quoted as saying in a statement released by his Likud party.
The premier, according to the statement, will immediately talk with ''other leaders that will form the coalition''.
Likud's victory has surprised Israelis because it was in no way anticipated by either surveys over the past few weeks nor exit polls last night.
According to the latest tally, Likud has won 29 seats in the 120-seat Knesset - which could go up to 30 once soldiers' votes are counted - while the rival Zionist Union of Isaac Herzog and Tzipi Livni obtained 24.
The United Arab List obtained a record 14 seats but will remain in the opposition.
Many initial comments complimented Netanyahu for his ability to garner key votes in the last two to three days prior to the elections, gaining a lead over Herzog in a personal success that has surprised his own party.
The Zionist Union immediately looked back at its electoral campaign, criticizing what now appears like a mistake it made - turning the campaign into a sort of referendum on Netanyahu.
Tomorrow President Reuven Rivlin will get the final tally of the election and will have no other choice than giving 'Bibi' the task of forming a new government.
Netanyahu wants to include Moshe Kahlon, leader of the upstart centrist Kulanu party and obtained 10 seats. With such support, the premier could form a coalition of 67-68 MPs, confronting a new mandate with a full control of parliament.
Netanyahu would reach the target set last November when he made the surprise announcement of calling early elections to get rid of a coalition without discipline, which he found ''unmanageable''.