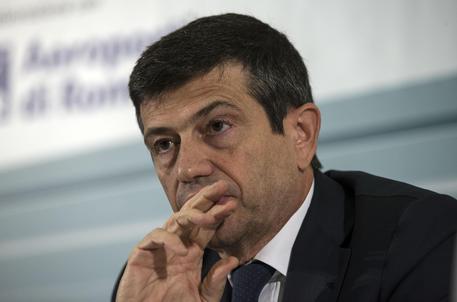 (ANSA) - Rome, March 17 - Under-fire Transport and Infrastructure Minister Maurizio Lupi is not thinking of resigning for the moment, ANSA sources said Tuesday. There have been calls for the minister to quit from several quarters after his son was linked to a corruption probe.
Lupi spoke to Premier Matteo Renzi several times on the telephone Tuesday, the sources said. The minister reportedly confirmed that he would take part at event at the Rho trade-fair centre near Milan as planned on Wednesday. Earlier on Tuesday Lupi, of the junior government partner the New Centre Right (NCD), was said to be reconsidering his position after facing a joint no-confidence motion from the small opposition Left Ecology and Freedom (SEL) party as well as from former comedian Beppe Grillo's anti-establishment 5-Star Movement (M5S). SEL proposed a no-confidence motion in connection with a massive graft probe uncovered Monday related to the infrastructure ministry and its previous incarnation as the public works ministry. "It would be an act of strength," if the senior government partner the Democratic Party (PD) removed Lupi, said SEL House Leader Arturo Scotto. Judges investigating corruption in public contracts have suggested a relationship between Lupi and some accused in the probe. Lupi was said Monday to have received an expensive new suit from one of those probed while his son Luca was given a Rolex watch as a graduation present from the so-called 'boss' of public-works graft, former manager and now consultant Ercole Incalza. The other main person under investigation, businessman Stefano Perotti, was said to have procured a job for Luca Lupi as a site manager, even though he already had 17 managers on the site. Grillo, in presenting the joint motion, said Lupi must resign and "pay back all the money he has made at the ministry in the past two years". "Lupi is either a failure as a minister, or brings bad luck. Or both," said Grillo. He added that Ercole 'Ercolino' Incalza had had allegedly shady public-contract connections which Lupi should have known about. "Lupi must give explanations and resign," said Grillo. On Tuesday evening the ruling PD weighed in with party chair Matteo Orfini saying Lupi "must clarify some aspects" of a graft probe to which his son Luca has been linked. "There are things that arouse anxiety and concern...there is an absolute need to clarify certain aspects, then evaluations will be made". Pressure from outside politics also began to pile up on Lupi as the influential Catholic weekly Famiglia Cristiana, Italy's most-read publication, said "Italy is a continuous Bribesville", referring to the kickbacks scandals that swept away the post-WWII political order in the early 1990s. As for Lupi, it noted that he had not been accused of any crime but asked whether his allegedly shady connections were "ethically acceptable". And Italian Bishops' Conference chief Angelo Bagnasco chimed in to say "corruption is becoming a regime". "I will not resign even if, when I see my son pulled unjustly into this, I wonder if it is (worthwhile)," Lupi said earlier in the day. Luca Lupi has not been accused of any crime. "I try above all to overcome the bitterness of a father in seeing his son on the front page," when he is not involved, said Lupi. But late Tuesday Cabinet Secretary Graziano Delrio said Lupi was "thinking" about his position. "Lupi is not under investigation...it's clear there are political evaluations that will be made but we need to see more papers", Delrio said. "Then there's a decision that is up to the individual and I believe the minister is thinking about it," he said. Incalza, a public-works official for seven governments, was among four arrested including Perotti and Francesco Cavallo, as well as Incalza's aide Sandro Pacella, in a probe that saw more than 50 people including politicians placed under investigation for suspected kickbacks that inflated costs by as much as 40%. Lupi's son was allegedly hired by an engineer, Giorgio Mor, at Perotti's behest in what a judge said was a favour that might have been reciprocated in some way. The indirect hiring of Luca Lupi by Perotti may have been part of "an illicit quid pro quo" by the minister, a judge alleged. Lupi had already strongly denied suggestions on Monday that he asked favours for his son, saying the young man was so bright he didn't need paternal string-pulling to get a job. The Northern League on Tuesday demanded that NCD leader and Interior Minister Angelino Alfano also resign.