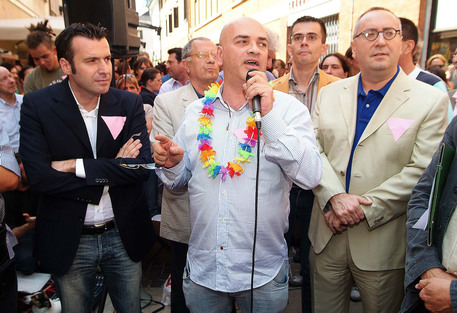 (ANSA) - Rome, March 16 - Premier Matteo Renzi told a meeting on civil rights of lawmakers from his center-left Democratic Party (PD) on Monday that his government wants a bill on civil unions approved, ideally before May regional elections.
"The PD agrees overall that we need a law on gay unions," said party undersecretary Ivan Scalfarotto. The question is not if, but how to draft the bill with regards to issues such as adoption and pensions, he added.
This came after the Lazio regional administrative court (TAR) on March 9 ruled in favor of gay plaintiffs that only civil courts, not prefects, can annul the transcription in Italy of gay marriages contracted abroad.
This was the latest move in Italy's contentious gay marriage debate after mayors in Bologna, Florence, Reggio Emilia, Rome, Milan, Trieste and Udine defied central government and transcribed gay marriages contracted abroad by Italian citizens.
The mayors, including Rome's Ignazio Marino, have created special registries for these unions and have proceeded to officially transcribe them.
Marino said in October that the city's legal department was considering whether to take the issue to the European Court of Human Rights.
Last month, Premier Matteo Renzi's ruling Democratic Party (PD) vowed to set up a work group to frame a law governing civil unions in Italy after a meeting with LGBT groups in Rome.
LGBT rights groups announced they are planning a mass wedding celebration in Rome for 100 couples in May.
The European Parliament last week called on EU member states that have not already done so, to recognise civil unions and same-sex marriage as a civil and human right.