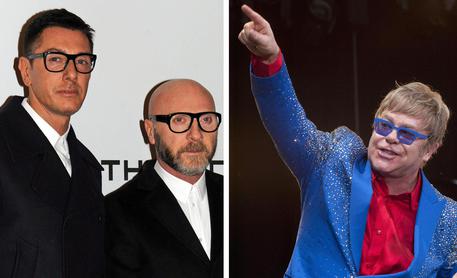 (refiling to correct typo in lead).
(ANSA) - Rome, March 16 - Domenico Dolce on Monday responded to the firestorm that erupted at the weekend after Elton John initiated a boycott against Dolce and Gabbana, following Dolce's comments that children born from in vitro fertilization were "chemical children" and "synthetic", and that surrogate mothers were "rented uteruses".
"I'm Sicilian and I grew up with a traditional family model, made up of a mother, father and children. I grew up this way, but that doesn't mean I don't approve of other choices. I spoke for myself, without judging the choices of others," Dolce said in a statement from Thailand where he is vacationing with his business partner Stefano Gabbana.
The media controversy blew up at the weekend following comments Dolce made in an interview with Italian weekly newsmagazine Panorama, where he said "the only family is a traditional family", which he defined as a child born from a mother and a father without IVF or a surrogate mother.
Elton John launched a boycott of the label in a post from his Instagram account, in which he said, "How dare you refer to my beautiful children as "synthetic". And shame on you for wagging your judgmental little fingers at IVF - a miracle that has allowed legions of loving people, both straight and gay, to fulfil their dream of having children. Your archaic thinking is out of step with the times, just like your fashions. I shall never wear Dolce and Gabbana ever again. #BoycottDolceGabbana".
Other celebrities including Ricky Martin, who has twin sons born from a surrogate mother, and Martina Navratilova, who recently wed her girlfriend, also joined the outcry with tweets in support of Elton John's boycott.
Courtney Love tweeted that she wanted to burn all her D&G clothes.
Stefano Gabbana, responding on his Instagram account Monday morning, called the boycott "craziness" and an example of intolerance.
"It's as if I'd boycott Elton John because he had two children with in vitro!! I'm not an idiot!!!" Gabbana wrote on his Instagram page.
Dolce and Gabbana have touted their idea of the traditional family in their recent runway shows, featuring a pregnant model in one and launching a campaign with the hashtag #DGfamily.