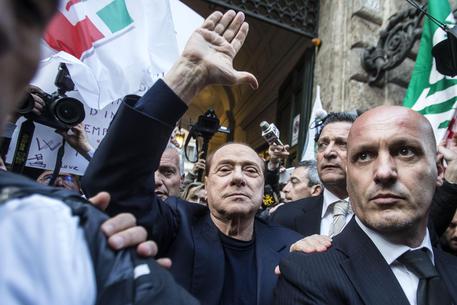 (ANSA) - Milan, March 13 - Silvio Berlusconi gave more than two million euros from 2010 to early 2014 to girls who attended his parties, judicial sources said Friday in a probe into alleged perjury by so-called 'bunga bunga' witnesses. These sums did not include money given to former exotic dancer and alleged underaged prostitute Ruby the Heartstealer, whose real name is Karima El Mahroug.
Investigators have said Berlusconi is still paying Ruby and other alleged prostitutes for their silence about the real nature of his bunga bunga parties.
Berlusconi allegedly recently paid for a lavish birthday party for the baby daughter of Ruby, who prosecutors say worked as an underage prostitute while she attended the parties in 2010.
The 7,000-euro party paid for in cash to former nightclub dancer Ruby was just one of several big cash handouts the ex-premier made via various factotums, they said.
Another allegedly funded a nine-day Maldives holiday for two people with an estimated cost of 60-90,000 euros, while Ruby also spent large amounts on haute couture.
The handouts of 14-15,000 euros each were made by people acting for Berlusconi in Milan and at Ruby's home in Genoa, investigators said.
Last month police searched the homes of Ruby and another 20 young women who attended the parties at Berlusconi's villa outside Milan, in a probe into suspected bribes by the media magnate for them to keep mum about the real, sexual nature of the parties, prosecutors said.
All the women allegedly had a lifestyle out of all proportion with their declared income, investigators said.
Unlike Ruby, who was paid by various people, all the others were allegedly on the payroll of Berlusconi's trusted 'treasurer', Giuseppe Spinelli.
Berlusconi was definitively cleared earlier this week last year of knowingly having sex with Ruby when she was 17, one year below the legal age to be a sex worker.
Judges upheld the three-time premier's assertion he did not know she was underage.
Berlusconi was also acquitted of abusing his position as premier to spring Ruby from a Milan police station where she was being held on an unrelated theft claim, by claiming she was gthe niece of former Egyptian president Hosni Mubarak.
Over 40 people are implicated in the new probe into suspected corruption in judicial proceedings and false testimony including Berlusconi, his historic lawyers Niccolo' Ghedini and Piero Longo, Ruby, Giuliante and many of the young women who took part in the bunga bunga parties at the ex-premier's private residence at Arcore.
Investigations began in January 2014 after Milan judges published their reasons for separate first-instance convictions of Berlusconi and of former TV anchor Emilio Fede, ex-talent scout Lele Mora and dental-hygienist-turned Lombardy councillor Nicole Minetti for pimping for the three-time premier.
Berlusconi was subsequently acquitted on appeal last July - a ruling upheld by the Cassation Court this week - on grounds there was no proof he knew Ruby was 17 at the time, while the conviction of Fede, Mora and Mienti was upheld on appeal in November.