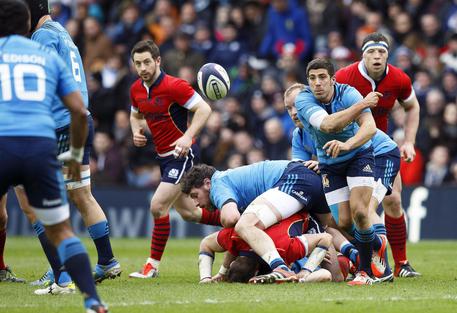 (ANSA) - Rome, March 2 - Italy captain Sergio Parisse has hailed his side's 22-19 win over Scotland at the weekend as a response to the stinging criticism that they have come under in recent weeks.
Some voices in the British media even suggested that the Azzurri were not doing enough to show they deserve a place in the tournament after 26-3 and 47-17 defeats to Ireland and England respectively in their first two matches this season.
"No one thought we'd win, not even the team staff and our families. So hats off," Parisse said after Italy's second-ever away win in the Six Nations.
"This victory is really good for us because, before the match, you could hear lots of things about the team, the wooden spoon, the international ranking and so on". Parisse added that Italy will now face France and Wales in their two final matches in Rome "with another attitude".
But he also said the Azzurri must cut down on costly mistakes, like the poor pass by flyhalf Kelly Haimona that gave Scotland centre Mark Bennett an easy try early on in Edinburgh on Saturday.