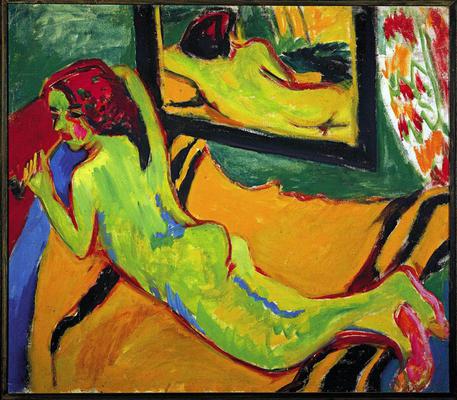 (ANSA) - Rome, February 19 - An exhibition of roughly 150 works of German Expressionism will be at Genoa's Palazzo Ducale from March 5 until July 12. Paintings, prints and drawings on loan from Berlin's Brucke Museum document the artistic revolution and the ferment that swept Europe towards WWI on the 100th anniversary of Italy joining the conflict in 1915, with many works by the movement's founders. The exhibition, entitled 'From Kirchner to Nolde. German Expressionism 1905-1913' was curated by Magdalena Moeller, director of the Berlin museum with which Palazzo Ducale worked closely for the exhibition. The works chosen illustrate the vision of radical renewal held by a group of artists determined to build a bridge between classical Neoromanticism and an entirely new style. The term 'German Expressionism' owes its origins mainly to the foundation of the 'Die Brucke' ('The Bridge') movement by Fritz Bleyl, Erich Heckel, Ernst Ludwig Kirchner and Karl Schmidt-Rottluff in Dresden on June 7, 1905. The movement took its inspiration from the lives of the artists, who worked to extract subjective elements from the reality surrounding them - the metropolis, street life and the circus - to stimulate reflections on human solitude, alienation and immorality. Incisiveness and an acidic, accentuated chromatic range soon become its distinctive features.
While the impressionists sought to immobilize an impression on their canvases and focused on the external reality, expressionism reveals emotion and sensuality, trying to achieve an effective expression that can stimulate, impress and involve.
A contemporary of French Fauvism, the movement dealt with such issues as existential unease, anguish and criticism of bourgeois society's hypocrisy. This translated into works of art with minimal, simplified lines (using Van Gogh, Gauguin, Munch and Matisse as models) and the tendency to alter space and prospective, drawing clear, cutting edges that are often highlighted with black strokes and the use of strong, contrasting colors. The human figure often dominates the composition in the form of a nude, but there are landscapes, city scenes and interiors as well. The Genoa exhibition takes into account many different strains of the movement through a careful selection of works, including oil paintings on canvas and tempera on cardboard, wood carvings, charcoal drawings, pastels and watercolors on paper, lithographs and etchings. It begins with Kirchner, a central painter of the movement, and several of his works, such as 'Artist Marcella' (1910), 'Nude Woman Combing Her Hair' (1913), 'Self-Portrait' (1914) and watercolors, pastels and drawings of urban contexts. There are also street scenes, 'At the Corner of Uhlandstrasse in Berlin' and 'Wittenbergplatz, Berlin' - both from 1915 - in which streets and squares are immortalized and filtered through the deforming lens of social polemics. Erich Heckel's paintings in the exhibition include 'Girl Playing the Lute', 'Cistern in the Shape of a Bull' and the 'Young Man and Girl', from 1909. The rich, modulated colors of Max Pechstein - such as in the 'Yellow and Black', 'Forest near Moritzburg', 'Laying Couple' and 'Dance - reveal a less heated, violent interpretation compared with poetic expressionism. From Karl Schmidt-Rottluff there are instead the extraordinary portraits 'Girl at her Toilet' and 'Thoughtful Woman' (1912), as well as landscapes with impressionist echoes and the 'Husband and Wife' and 'Courtesans after a Bath' etchings. Emil Nolde, who alongside Kirchner was the founder of the movement and perhaps also the most consistently expressionist, is represented by works such as 'Villagers' (1911), which is strongly reminiscent of caricature, and 'Two Exotic Figures', clearly influenced by African primitive sculpture, 'White Trunks' and 'The Jager Family Home in Alsen', in which the tempest of colors does not hide the refined quality of the scene itself.