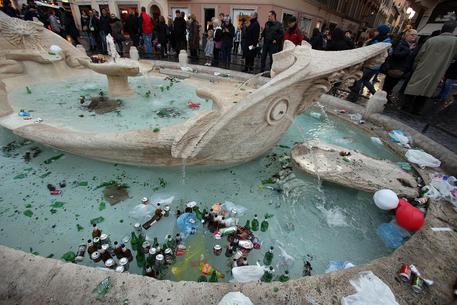 (ANSA) - Rome, February 19 - The Barcaccia (Sunken Boat) fountain, the 17th-century Bernini masterpiece attacked and damaged by Dutch soccer fans, just recently was unveiled after a lengthy restoration and clean-up.
The baroque gem nestling at the foot of the Spanish Steps, is the centrepiece of the Piazza di Spagna that was declared a pedestrian precinct on August 4.
The work is the first example of a fountain conceived entirely as a work of sculpture departing radically in geometric form from the classical basin.
According to popular legend the Barcaccia owes its name to a boat that was washed onto the square after the river Tiber burst its banks in 1598.
The fresh-water fountain was commissioned in 1627 by Pope Urban VIII, who wanted it at the foot of the escarpment on which the Trinita dei' Monti Church was built before the now famous staircase was constructed. The sculpture was completed in 1627 after work not only by Pietro, who died in 1629, but also by his more famous son Gian Lorenzo Bernini.
The fountain is in the shape of a half-sunken ship with water overflowing its bows into a basin below into which water flows also from fake cannon ports on the exterior bows and prow of the vessel. The Barcaccia is decorated with papal coats of arms dominated by bees, the heraldic symbol of the Barberini family.