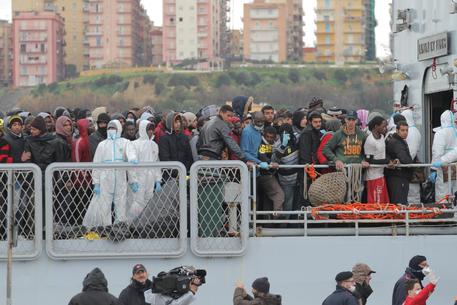 (see related story on Libya) (ANSA) - Brussels, February 19 - The European Commission on Thursday pledged to boost the assistance it gives to Italy to deal with the crisis caused by the arrival of thousands of migrants from North Africa. "The European Commission will reinforce its assistance to Italy for immigration," said Migration and Home Affairs Commissioner Dimitris Avramopoulos. Italy appealed to the EU to do more after over 300 people died in a disaster involving a series of migrant boats in waters south of Italy this month. The loss of life was blamed by some on the alleged inadequacies of the EU's Triton search-and-rescue programme in the Mediterranean, which replaced Italy's better-funded Mare Nostrum operation last year. "The message that we sent today is very simple," Avramopoulos said. "Italy is not alone. Europe is at Italy's side". The commissioner said Triton would run until the end of 2015, adding the the EU executive was ready to "react rapidly" to any request for the operation's funding to be boosted. Italy is also asking the international community to do more to resolve the crisis in Libya, from where many of the rickety migrant boats that attempt the hazardous Mediterranean crossing depart.
Human traffickers have capitalised on the chaos in Libya and Foreign Minister Paolo Gentiloni said on Wednesday that migrant landings in Italy have have gone up 59% since the beginning of 2015. Overall, 5,302 people have landed in Italy this year compared to 3,338 during the same period in 2014, he said.
"We heard Italy's appeal and we are responding in every way we can," said European Commission Vice-President Frans Timmermans.
Gentiloni said Thursday's announcement as "a first step".
"We trust that at the March 4 commissioners' summit (on the Agenda for Migration) further action will be defined to cope with the urgency of the challenge," he added.