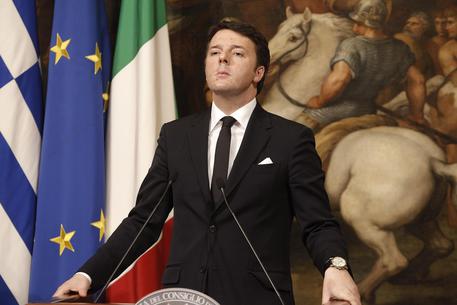 (ANSA) - Rome, February 17 - Premier Matteo Renzi huddled with Foreign Minister Paolo Gentiloni, Interior Minister Angelino Alfano and Defence Minister Roberta Pinotti at his office in Rome to discuss the situation in Libya on Tuesday.
During the meeting, Italy's commitment to a strong diplomatic campaign at the United Nations level was reiterated. On Tuesday Renzi ruled out for the time being the possibility of Italy conducting a military intervention in Libya to head off the threat posed by jihadists linked to ISIS on the other side of the Mediterranean.
"It's not the time for a military intervention," Renzi told Mediaset television Monday. "We've been saying at every level that Libya is out of control for three years and we'll keep doing so," Renzi added.
"The international community has all the necessary instruments to intervene if it wants to. Our proposal is to wait for the UN Security Council. "The strength of the UN is decidedly superior to that of the radical militias".
Last week Gentiloni had said that Italy might participate in a United Nations-mandated operation in Libya. But on Monday Renzi called for calm after the beheading of a group of Egyptian Copts in Libya on Sunday and threats that ISIS was now "south of Rome". In response to the tensions, Italy closed its embassy in Libya and brought back about 60 Italians early Monday. On Tuesday a senior member of Palestinian Islamic group Hamas, Salah Bardawil, warned Italy not to embark on a military intervention in Libya, saying this would be considered "a new Crusade against Arab countries and Muslims". Bardawil was quoted by the Palinfo agency as warning "some countries, such as Italy" against using the "excuse of fighting terrorism" to meddle in Libya.